Offered here is a highly unusual Winchester Model 1895 Rifle that was converted to a 410 shotgun and owned by the legendary American marksman Frank Butler. According to the included Thomas Bland & Sons letter, "The gun was imported into England where it was finished in .303 British and subsequently converted to a 410 shotgun. The action and related hardware were best finished and scroll engraved...The gun was completed and delivered on 22 February 1898 and delivered to Mr. [Frank] Butler." The February 2012 dated T. Bland & Sons letter is addressed to noted western frontier collector John Fox, the then owner of the shotgun. Frank Butler is one of the iconic Wild West performers that enthralled audiences in the late 19th century and early 20th century with his shooting prowess. He was also the husband of fellow American sharpshooter star Annie Oakley. While touring the country with his shooting act, Butler met his future wife in Cincinnati, Ohio. Butler accepted a challenge to shoot against any local sharpshooter. A match pitted Butler against a 15 year old Annie Oakley (born Phoebe Ann Mosey). Butler lost the match when he missed his 25th shot. The two sharpshooters began a courtship and soon married. In 1882, after Oakley stood in for Butler's sick partner, the couple created their own shooting act simply known as Butler and Oakley. In 1885, they signed on to Buffalo Bill's Wild West Show where they captivated audiences for the next 16 years. Oakley became the star attraction, earning more money and international fame than most of the Buffalo Bill performers, and Butler handled the business end of the venture. Outside the partnership, Butler worked as a UMC representative and Remington Arms Co. salesman. Oakley continued to perform after leaving Buffalo Bill's Wild West. She retired from show business in 1913. In November 1926 the couple died 18 days apart. The receiver is decorated with floral scrollwork and borders. Both sides of the receiver are signed "T. BLAND & SONS" in a banner. The T. Bland & Sons serial number ("15438") is on the bolt. Additional scrollwork is featured on the lever and upper tang. The trapdoor shotgun buttplate screws have a floral blossom engraving. British proofs are stamped on the barrel, bolt and receiver. The rifle was proofed in .303 British and later proofed in 410 shotgun with 3 inch chambers as confirmed by the T. Bland & Sons letter. The matted rib is signed "T. BLAND & SONS 430 WEST STRAND LONDON" ahead of the rear sight and "WINNERS OF THE/1885/AMERICAN RIFLE TRIALS" at the breech. The rifle is fitted with a blade front sight and a four leaf rear sight (one fixed) graduated to 400 yards. The highly figured walnut forearm and round knob pistol grip stock have multi-point checkering. The forend has a horn cap. The underside of the buttstock has a blank silver inscription oval. Provenance: The John Fox Collection

Fine as period retailer converted to .410 shotgun configuration. The barrel retains 60% thinned blue finish. The receiver, bolt, magazine and lever retain 70% blue finish with a smooth brown patina on the balance. The engraving is crisp. Traces of blue finish remains on the buttplate. The wood is also fine with minor dings and scratches and some blemishes in the checkering. Mechanically excellent. 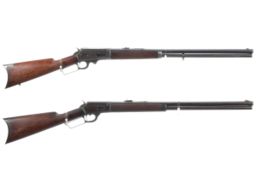 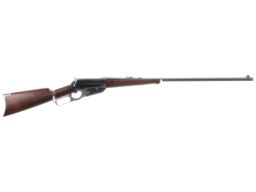 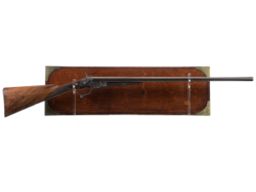 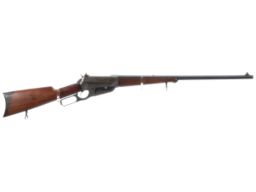 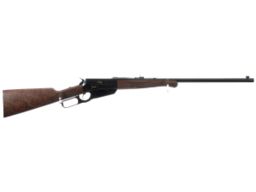 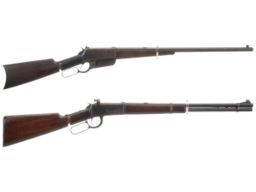