This is one of approximately 4,000 muskets delivered by Eli Whitney for his 1808 and 1810 dated contracts with the state of New York. These Whitney New York contract muskets are described on pages 247-249 of George D. Moller's book "American Military Shoulder Arms, Volume II" with this exact musket pictured on pages 247 and 248. The picture caption at the top of page 247 states, "The muskets delivered by Eli Whitney under his contracts of 1808 and 1810 with the State of New York are visually similar to the 1798 (Type III) muskets delivered under his U.S. contract but have some improvements stipulated in the contract." The picture caption on page 248 states, "Whitney appears to have proved the barrels of the muskets delivered under his New York contracts, as they are stamped with the same sunken oval cartouche containing a raised 'P' that he used in his U.S. contract of 1812. The barrels are also stamped with New York's ownership mark, 'SNY.' The stock's left breech flat is stamped with New York state armorer John McLean's acceptance mark of 'V' over 'BY' over 'I.M' in a circular cartouche with scalloped edges." Features include a top mounted bayonet stud, brass blade front sight on the rear strap of the front barrel band, an eagle motif above "NEW HAVEN" marked at the center of the lock, small mating marks on all internal and external parts of the lock. "GDM" (George D. Moller) collection initials marked at the toe of the stock. Includes a socket bayonet (very tight fit) and period leather sling. Provenance: The George Moller Collection

Good with scattered light pitting overall and crisp markings on the lock and barrel. Stock is also good with scattered dents and scratches, a replacement spliced forend starting from behind the middle barrel band forward, a chip around the rear band spring, a crack ahead of the rear lock screw, and a chip at the toe. Mechanically needs adjustment, hammer will not release without manual assistance. Included bayonet is fair with scattered moderate pitting, sling is very good with light cracking and age related wear. 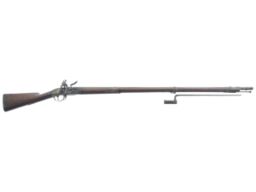 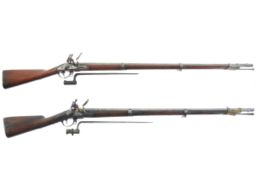 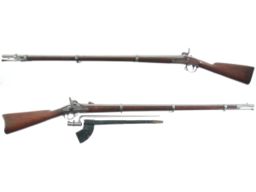 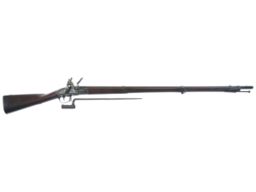 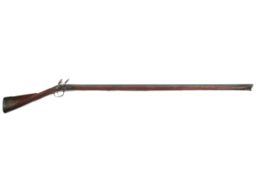 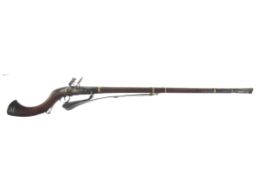