The Model 1819 Hall was the first U.S. military breech loading firearm issued in large numbers and also the first firearm manufactured with totally interchangeable parts. In 1819, John H. Hall entered into a contract with the War Department for 1,000 of his breech loading rifles. Hall occupied an old armory sawmill next to the Harpers Ferry Armory that became known as Hall's Rifle Works. In 1826, a government commission disassembled 100 Hall rifles, mixed up the parts, and re-assembled them on newly received stocks with no reported problems and thus confirmed Hall's success. This example is one of approximately 970 manufactured by Harpers Ferry in the year 1834 of approximately 19,680 total Harpers Ferry manufactured Hall Model 1819 rifles. Hall rifles are described on pages 465-473 of George D. Moller's book "American Military Shoulder Arms, Volume II", with this exact rifle pictured on page 471 next to the caption, "Until 1837 the upper edge of the stock is cut away to provide a 4"-long gas escape port located just below the receivers side rails, at the front of the breech block. Note also that the cock's forward motion is arrested by the lower jaw's engagement with the upper edge of the flash shield." This rifle has the standard offset blade and notch sights, "J. H. HALL/H. FERRY/US/1834" marked breech block, barrel bands retained by pins, and a proper button head ramrod. "GDM" (George D. Moller) collection initials marked at the toe of the stock. Includes socket bayonet and period leather sling. Provenance: The George Moller Collection

Exceptionally fine, retains 90% original brown finish with some light muzzle wear from socket bayonet mounting, some very light flash pitting, and crisp markings on the breech block. Stock is very fine plus with attractive original raised grain, some light scratches, some minor chips behind the breech lever plate on the underbelly, a small hairline crack ahead of the buttplate tang, and defined edges overall. Mechanically excellent. Included bayonet is very fine with some minor pitting and sharp edges. This exceptional example of a Hall rifle appears to have seen little, if any, use at all and would make a fine addition to any U.S. Martial collection! 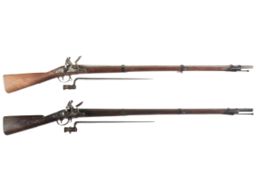 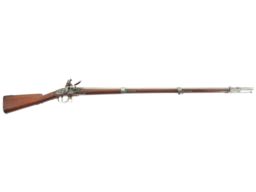 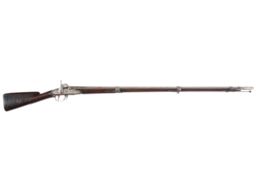 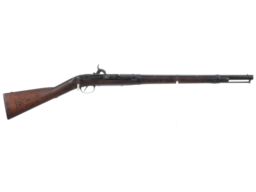 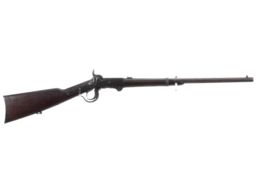 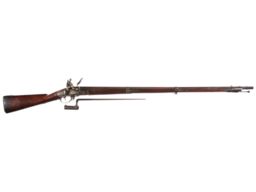