The Jenks is unique in that it is the only side hammer weapon officially used by the U.S. military. E. Remington & Sons purchased machinery and a U.S. Navy contract for 1,000 Jenks carbines from Ames Manufacturing Company and manufactured them circa 1847-48. The distinguishing feature of the Jenks-Remington typically includes the Maynard tape primer, although this Remington example was made without it. According to "Flayderman's Guide, 9th Edition" page 624 states, "Three specimens of this model known with the usual lock (i.e. not made with Maynard primer as on 9B-063) marked only REMINGTON'S/HERKIMER, N.Y. Presumably fabricated in c. 1846-47 in the interim during transfer of the Navy contract and the equipment from Ames to Remington. Very Rare." The Jenks carbines were originally smoothbores with a round loading aperture. Around 1861 most Jenks carbines were rifled and had the loading aperture enlarged to an oval shape to accept a paper cartridge rather than loose balls and powder; with this example escaping said alteration and still retaining its original round loading aperture and smoothbore. Features a "REMINGTON'S/HERKIMER/N.Y." marking on the lock plate. Marked "7/35" on the underside of the breech lever, "W JENKS" parallel to the bore on the barrel at the breech followed by "U.S.R./P/1847/CAST-STEEL" perpendicular to the bore ahead of the round loading aperture. The rare U.S.R. mark indicates purchase by the U.S. Revenue Cutter Service; with other known U.S.R. marked examples typically seen with the round loading aperture and without sling ring as on this example. Faint boxed script "RP" (Richard Paine) cartouche on the left of the stock ahead of another partially visible boxed script cartouche. Some small "P" marks on a few of the components. Other features include the integral blade front sight on the foremost of the two brass barrel bands, the integral notch sight on the top of the lever, brass trigger guard, and brass buttplate. "GDM" (George D. Moller) collection initials marked at the toe of the stock. Provenance: The George Moller Collection

Very good, retaining traces of thinning original brown finish on the barrel. Traces of original case colors with some areas of light thinning on top of the breech lever. Stock is also very good as re-oiled with some light scratches and dents and faded cartouches. Mechanically excellent. An extremely rare Jenks carbine! 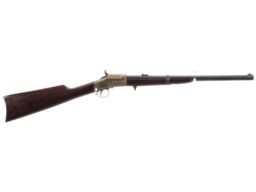 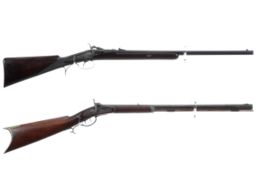 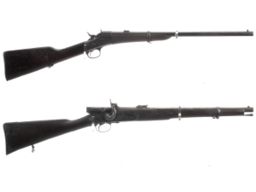 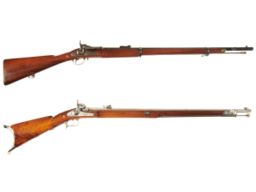 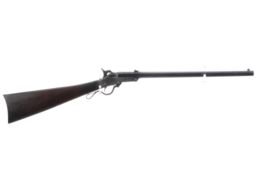 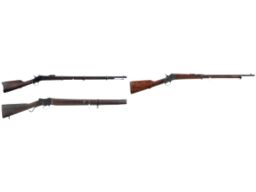