U.S. Lindner alteration rifles are described on pages 181-183 of George D. Moller's book "American Military Shoulder Arms Volume III", with this exact rifle pictured on page 181 next to the caption, "The 200 Model 1841 rifles altered to the Lindner breechloading system for U.S. service in General Butler's forces differed from those altered for Massachusetts. Instead of a barrel mounted rear sight, they had a long range rear peep sight mounted through the breech cover." The alteration of these 200 Model 1841 rifles to Lindners breech loading system was performed in late 1861 by Allen & Morse of Boston. The locking "screw-sleeve" on this rifle is marked "PATENTED/MAR. 29, 1859" on top in reference to Edward Lindner's U.S. patent number 23,378. Lindner's breech loading system utilizes a locking "screw-sleeve" coupling that joins the breech end of the barrel to a tip-up threaded breech block with a chamfered face. To load, the knob on the screw-sleeve is rotated counter clockwise using the right hand, which allows the spring loaded breech block to tip upwards for loading with a combustible paper contained cartridge or loose powder and ball. Once loaded, the spring-loaded breech block is pushed down and held with the left thumb, and the screw-sleeve is rotated clockwise gripping the knob with the right hand; creating a tight gas seal. These Lindner conversion rifles have a distinctive reinforcing metal plate, brass on this example, ahead of the trigger guard fixed with a wedged pin. The brass breech cover/upper tang is fitted with a detachable windage adjustable peep sight that would have been mounted at the time of its Lindner alteration. Seven-groove rifling. The breech block is marked "U.S./J.P.C./P" (James P. Chapman, inspector) on top and serial number "160" on the underside. Matching serial number "160" is also marked on the left of the stock hidden beneath the rear barrel band and underneath the brass reinforcing plate. "WINDSOR VT/1850" marked at the tail of the lock and "ROBBINS/&/LAWRENCE/U.S." at the center. "GDM" (George D. Moller) collection initials marked at the toe of the stock. Includes a Drake pattern socket bayonet, Watervliet Arsenal leather sling, tools and an extra nipple in the patchbox. Provenance: The George Moller Collection

Very good with scattered moderate pitting and brown patina on the barrel. The breech block and breech coupling are turned to a smooth gray patina with some light pitting, brown patina on the knob, and crisp markings on the breech block. Casehardened lock and hammer turned to a brown patina with crisp markings. Brass fittings retain an attractive golden aged patina. Stock is also very good as lightly arsenal refinished with scattered dings and scratches, chips in the ramrod channel, a small chip on the right ahead of the reinforcing plate, cracks beneath the breech knob (common on these Lindner alterations), two small chips ahead of the lock, a crack/chip above the rear lock screw, and an empty threaded hole on top of the buttstock just ahead of the buttplate. Mechanically excellent. Included bayonet is good with some light to moderate pitting. An opportunity to own one of the scarcest breech loading rifles of the Civil War! 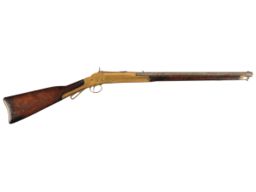 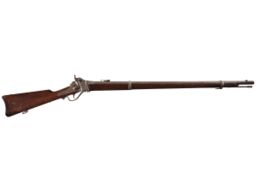 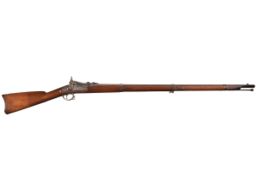 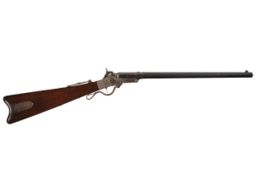 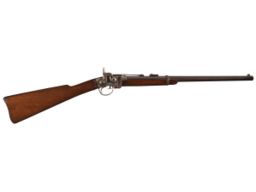 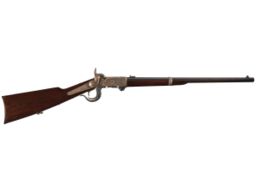