This Henry lever action rifle was manufactured by the New Haven Arms Company in April 1863 and owned by David Padgett, Company K, 66th Illinois Infantry (Western Sharpshooters). This rifle was one of an estimated 250 Henry rifles privately purchased by members of the 66th Illinois Infantry. Most of these rifles are believed to have been purchased in early 1864 using the $100 re-enlistment bonus paid to veterans in November 1864. This rifle is engraved with the owners name "DAVID PADGETT" on the left sideplate above a ribbon bearing the unit markings "Co. K 66th ILL. W.S.S." enclosed in a rectangle with scroll and feather border. The left front of the receiver is decorated with a United States flag. The right sideplate is engraved with a stylized spread eagle with an olive branch and arrows with rectangular double-line borders and simple scroll work. The right front of the receiver is engraved with several 'squirrel tails' commemorate Padgett's original membership in the 3rd Ohio Sharpshooters ("Squirrel Tail Regiment") which had two companies incorporated in the original Western Sharpshooters. The Western Sharpshooters was a specially raised unit of marksmen recruited by Colonel John Birge from Illinois, Missouri and Ohio organized in St. Louis in November 1861. The Western Sharpshooters was re-designated the 66th Illinois Infantry in November 1862. The regiment was initially armed with Plains Rifles manufactured by H.E. Dimick of St. Louis. The Dimick rifles were ineffective infantry weapons and were replaced by many members of the regiment with Henry rifles. The 66th Illinois used Henry rifles to great effect during the Atlanta Campaign where it was under fire for 120 days, participated in fifteen actions and lost 225 officers and men killed and wounded. This rifle is listed by serial number on page 67 of "THE HISTORIC HENRY RIFLE" by Wiley Sword. 66th Illinois Henry rifles with similar engraving are illustrated in "THE HENRY RIFLE" by Les Quick (serial no. 1672/Co. D), "THE WINCHESTER BOOK" by George Madis (serial no. 2523/Co. D) and "WINCHESTER ENGRAVING" by R.L. Wilson (serial no. 2582/Co. A). Included with the rifle are copies of David Padgett's pension requests dated 1898 and 1913. The rifle has the distinctive Henry brass receiver and buttplate with octagon barrel and integral 15-shot magazine. The barrel has a square-back, nickel-silver, front sight blade, dove-tail mounted, folding leaf rear sight with 900 yard marking at the top of the sight blade and elevation bar with rounded ends and large diameter brass magazine follower. The top barrel flat has the small, first pattern, New Haven Arms legend roll-stamped ahead of the rear sight and serial number stamped behind the rear sight. The receiver has the alternate rear sight dove-tail utilized to about serial number 3000, beveled magazine follower cut, hammer with knurled spur and loading lever with 'tail' and latch. The left side of the stock and barrel are fitted with a sling swivel and screw-mounted loop for a sling hook. The straight grain walnut stock is oil finished with the first style brass buttplate with rounded heel. The serial number is located: (1) on the top barrel flat, (2) on the lower left side of the receiver tang, (3) in the stock upper tang inlet, (4) on the inside of the buttplate below the trap door, (5) on the shanks of both hand-fitted buttplate screws and (6) on the shanks of all three tang screws. All visible serial numbers match. The "H" inspection mark of B. Tyler Henry is stamped on the lower tang behind the lever latch. The top of the buttplate heel is stamped "l/341" - the significance of this marking is unknown. This rifle is complete with a very rare Henry russet leather sling with brass hook and buckle and the equally rare four-piece, jointed, hickory cleaning rod provided with early production Henry rifles.

Very good. The blue on the barrel/magazine has aged to an attractive plum brown. The surfaces of the barrel/magazine are smooth, the edges are sharp and the markings are crisp. The front and rear sights are both original to the rifle. The brass receiver and buttplate have an attractive aged patina and show minimal handling wear. The sideplate joints are tight. The simple, well-executed, engraving is crisp. Traces of fire blue finish are visible on the bolt. The hammer retains patterns of the mottled case colors. The sides of the trigger shows some light pitting; the loading lever has a mottled brown patina. The receiver, tang and buttplate screws are in fine condition. The stock also remains in very good condition with scattered use/handling marks. The buttplate shows only light handling wear. The rare russet leather sling is solid with smooth surfaces and good stitching. The included four piece hickory cleaning rod is very fine. This is an exceptional, well-documented, example of a period engraved rifle carried by one of the regiments most closely associated with combat use of the Henry rifle. It would be very difficult to find a better example of a documented, engraved and combat carried Henry rifle. 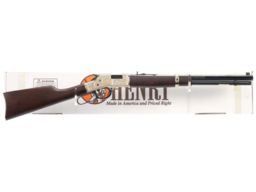 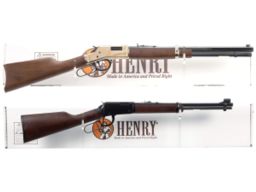 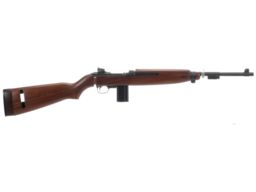 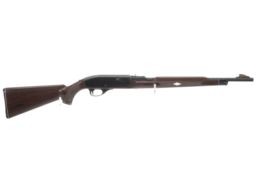 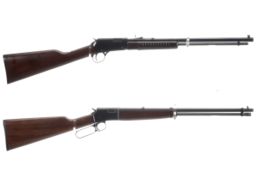 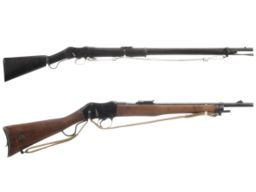