This "firelock" was noted by George Moller as a colonial militia musket on page 61 of "American Military Shoulder Arms, Volume 1: Colonial and Revolutionary War Arms." The barrel has a blade front sight, banded transition point, and groove in the breech for a rear sight. The large lock is secured by three screws, has an internal bridle, and does not have a pan bridle. Both the barrel and lock are attributed as from an early 18th century British musket pre-1707 (accidentally noted as prior to 1607 in the book). The barrel tang is secured by a screw passing through the stock from below, and the trigger is fitted in a slot in the stock, not a trigger plate. Moller notes that the early French musket trigger guard and the frizzen are believed to be period replacement parts. The guard is noted by Moller as marked "A&C" on the underside of the rear tang. The forend band and two ramrod ferrules are sheet brass. There is no entry pipe, and the butt is bare and has a rounded heel. Includes an iron ramrod with crudely folded back tip that Moller indicates may have been made to meet requirements for steel rods during the Revolutionary War. Provenance: The George Moller Collection

Fair with gray patina on the iron components along with moderate pitting mainly at the breech, and aged patina on the brass. The stock is poor and has multiple cracks, chips, and repairs. The trigger and sear engagement needs work, but the lock holds half and full-cock. 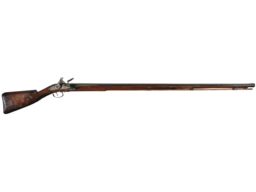 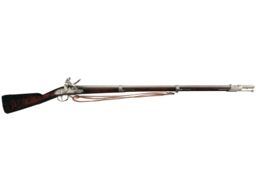 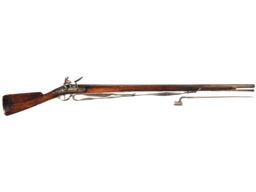 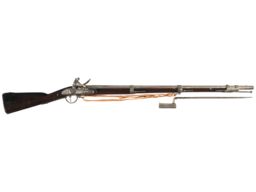 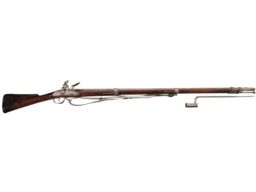