This likely one-off Civil War era prototype breech loading rimfire metallic cartridge saddle ring carbine was invented by John S. Adams of Taunton, Massachusetts and is exactly as depicted and described in his U.S. patent number 44,377 dated September 27th, 1864 while also having features described in his previous U.S. patent number 39,455 dated August 11th, 1863. In the text of the 1864 dated patent, John Adams states, "My invention consists in hinging to the rear end of a movable cartridge-chamber a breechblock, so that it may open to receive a metallic, Sharps, or other cartridge from the rear end, and close itself firmly when the chamber is brought into position for firing the piece. My invention further consists in the mechanical device for withdrawing or ejecting the discharged copper cartridge-cases by the sliding trigger guard, and the mode of attaching the same to the movable chamber." This gun also utilizes the same chamber and breech block mechanism described in John S. Adams previous patent number 39,455 in which the breech block is able to be easily removed for cleaning by pressing the large button heads of the spring loaded screws, located on either side of the frame at the breech blocks axis of rotation, allowing the breech block to be slid out of the bottom of the frame by hand. It is fitted with a Sharps addressed six-groove rifled barrel marked "38926" on the underside that appears to be taken off of a Sharps New Model 1859 carbine and has been shortened slightly at the breech end from its original 22" length, and wearing a Lawrence patent ladder rear sight graduated to 800 yards with the 900 yard notch at the top. The patchbox and buttplate also appear to be from a Sharps New Model 1859 carbine while the wood furniture shares slight visual similarities with a Sharps carbine. The trigger guard breech lever on bottom serves two purposes; it is used to rotate the breech block for opening, and then can be pulled back ,in which it rides in a sliding track in the bottom of the breech block, to use built-in dual extractors for removal of a spent shell casing out of the rear of the breech block. A hatch door on the back of the breech block opens simultaneously when the extractors are pulled back, which allows an opening for loading from the rear of the breech block as well. This interesting and well built carbine invented by John S. Adams is certainly a rare piece of U.S. firearms history.

Fine with smooth brown patina overall and scattered areas of light pitting. Wood is also very good with scattered scratches and dents and a repaired section at the toe. Mechanically fine, but the firing pin is absent. 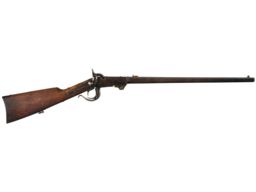 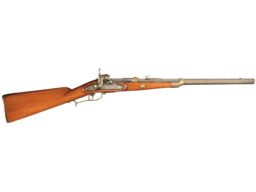 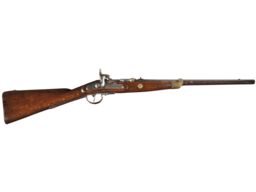 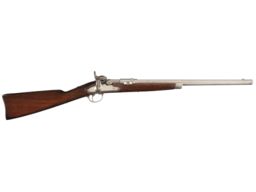 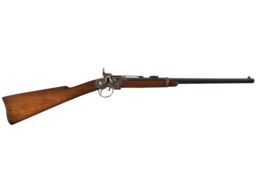 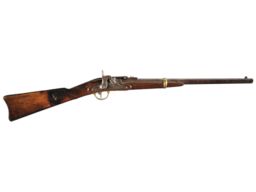