Among Colt collectors, the Charter Oak gripped revolvers are among the rarest and most desirable of all Colt percussion firearms. Less than ten Colt Model 1855 revolvers and one Model 1849 Pocket Revolver are known to have been fitted with these historic grips, mostly for presentation by Samuel Colt himself to his friends and business allies. This revolver is pictured on page 79 of "The Colt Heritage" by R.L. Wilson alongside the "Proceedings at the Dedication of Charter Oak Hall Upon the South Meadow Grounds of Col. Samuel Colt." The Charter Oak was a massive, ancient looking oak tree that grew on Wyllys Hyll in Hartford, Connecticut, and has remained an enduring symbol of Connecticut. It was a landmark for Native Americans even prior to European settlement and earned its moniker due to local lore that said Connecticut's Royal Charter of 1662 was hidden in the famous tree in 1687 to prevent it from being taken by Governor General Edmund Andros. Tragically, the tree was blown over in a severe storm on August 21, 1856. A large funeral service was held at which Samuel Colt’s band played dirges in its honor. American author Isaac W. Stuart, the owner of the property, had several items prepared from the wood, including furniture for the state capitol. The wood was also used to create other special items, including grips on revolvers presented by Samuel Colt, furniture for Colt's mansion, walking sticks (including one presented to President Andrew Johnson), and other historical artifacts. Given the significance of the special Charter Oak grips, nearly all of the Charter Oak gripped revolvers were inscribed making this revolver particularly rare. This Model 2 variant of the "Root" revolver was manufactured in 1856. It features high coverage and finely executed scroll engraving with beaded backgrounds. The engraving may be the work of Herman Bodenstein. The Model 1855 with a Charter Oak grip pictured on pages 22 and 23 of "Colt Engravers of the Nineteenth Century" by Herbert G. Houze is attributed to Bodenstein and features fairly similar engraving and is identified as the one presented to influential New York dealer A.W. Spies. The current revolver, however, includes more floral accents and actually has more deluxe engraving that extends onto the cylinder and loading lever arm. The level of engraving makes it particularly interesting that the backstrap retains an open panel to allow for an inscription. Given the other Charter Oak Model 1855s were generally presented by Samuel Colt himself, it is possible this revolver was held for a later presentation or was left blank in discretion. Samuel Colt is certainly well-known for his early use of marketing and promotional stunts, including presenting weapons to influential individuals both close to home and far abroad for the purposes of furthering his business interests and prestige. No matter what this revolver's purpose was, it was certain to have been significant, or Colt would not have used the precious wood from the historic Charter Oak for the grip. The fact that the cylinder is hand engraved and features an engraved scene and serial number also demonstrates the extra attention given to this revolver suggesting a special purpose. The hammer has eight dots in the chevron below the knurling. Dots on the hammers of engraved Colts are often said to each represent a full day of engraving work. The barrel has a brass cone front sight and has the standard manicule, "+COLT'S PT/1855+," and "ADDRESS COL. COLT/HARTFORD, CT. U.S.A.+" markings on top and the matching serial number on the bottom. The cylinder has the cabin and Indian scene, "COLTS PATENT" etching, matching script serial number, and "G" on the rear face. The serial number is also repeated on the butt. The case contains an eagle pocket model powder flask, "COLTS/PATENT" marked double cavity bullet mold, and oiler.

Extremely fine. The engraving is exceptional and remains crisp more than 160 years later. Aside from the cylinder which displays an attractive smooth gray patina, the revolver retains 75% of the original high polish blue finish and strong original case colors on the lever and hammer. There is some mild flash pitting on and around the nipples and light finish wear on the edges suggesting this revolver was actually carried and fired by its recipient. The grip also remains extremely very fine with the exception of a small chip at the toe, a few light marks, and minor lower edge wear. Mechanically excellent. The case and accessories are all very fine and have minor age and storage related wear. This is an incredible Colt Model 1855 "Root" with an extra fine grade of deluxe factory engraving and an incredibly historic Charter Oak grip and will add beauty and value to any advanced Colt collection. 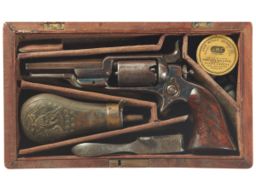 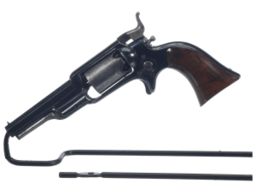 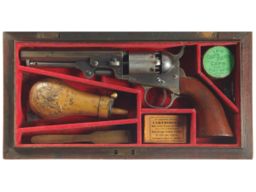 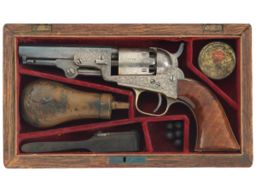 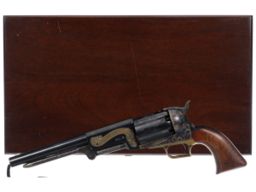 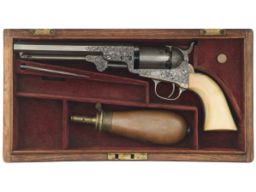