These Spanish Model 1757 muskets were manufactured circa 1757-1788. Page 406 of George D. Moller's book "American Military Shoulder Arms Volume I" has a similar example pictured and states, "During the American Revolution the Model 1757 saw extensive use in the hands of the Spanish Regular and militia forces in the Louisiana and Florida campaigns as well as in the Spanish forts along the Mississippi and in the attack on Detroit [Fort St. Joseph, February 12th, 1781]... The Model 1757 musket was adopted by a royal order of June 14, 1757. It resembles the French Model 1754 musket but is brass-mounted and somewhat shorter. Its salient feature is a flintlock with a ring-type jaw screw. It continued as the Spanish regulation infantry arm until 1789, when it was superseded by a similar musket equipped with a miquelet lock." Features a bottom mounted bayonet lug towards the muzzle and blade front sight mounted on the forward strap of the front barrel band. All brass fittings including three barrel bands. A maker name that appears to read "YRIBE" marked at the tail of the lock, and a faint small crown marked upside down at the bottom center. Faintly marked "EX" and a crown over "D" marked on the top left flat of the barrel at the breech, and a faint "N" ahead of very faint illegible remnants of markings on the top flat at the breech. Small "GDM" (George D. Moller) collection initials marked at the toe of the stock. Includes a socket bayonet with period markings and a reproduction leather sling. Provenance: The George Moller Collection

Good with smooth brown patina, mild flash pitting at the breech and on the lock, and some faint remnants of an old refinished blue finish evident on the lock which has a modern made replacement frizzen spring. Stock is also good as re-oiled with scattered scratches and dents, a crack ahead of the rear lock screw, a chipped/absent section below the front of the lock, some minor chips behind the lock, a chipped/absent section to the left of the barrel tang, a crack to the right of the barrel tang, a crack below the point of the comb, a crack ahead of the buttplate tang and at the toe, some chips at the toe, and an attractive figure overall. Mechanically fine. Included bayonet is also good with scattered moderate pitting. Spanish Model 1757 muskets are very rarely seen on the collector market today with the limited surviving examples mostly residing in museum collections. This example would make an excellent addition to any early martial or Revolutionary War era collection! 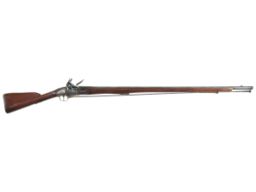 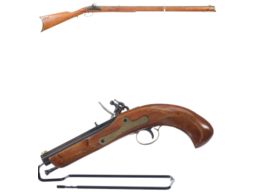 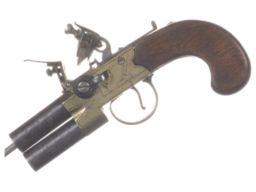 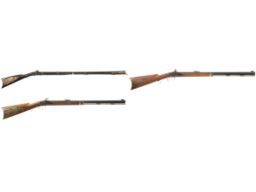 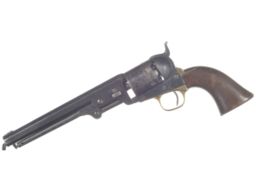 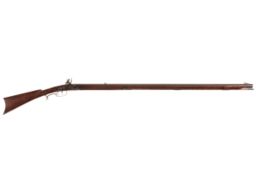