This is an extraordinary example of a gold inlaid and silver mounted flintlock pistol from the Ottoman Empire. Founded by Oghuz Turks under Osman Bey in north-western Anatolia in 1299, the Ottoman Empire dissolved in 1922 and broke apart into several countries including Turkey, Syria, Lebanon, and Iraq as a result of the aftermath of World War I. The Ottoman Empire's firearms were often ornately decorated, and this pistol, which was possibly handcrafted for a sultan, exhibits the highest quality of Ottoman Empire craftsmanship of the period. The lock plate and hammer are profusely adorned with a gold inlaid design. The barrel tang and barrel tang screw head are accented with a gold inlaid pattern. The Damascus barrel has a gold inlaid band and gold inlaid accents at the rear with gold around the touch hole and a gold inlaid accent ahead of the brass front sight. The flash pan is also decorated with gold. The trigger guard and buttcap are silver and exhibit a fine chiseled floral pattern. Engraved silver tacked adornments are featured on the forearm, stock flat, and the area around the barrel tang. Silver wire inlaid scroll patterns are featured on the stock flat, around the barrel tang and near the bottom of the flared stock butt. The full length, nicely figured stock is equally impressive with a fine checkered pattern accented with silver piercing and with a forearm cap in silver with a 3 1/4 inch long extension on the underside. The back of the grip area has an engraved silver escutcheon.

Extremely fine. The barrel retains 90% of the Damascus pattern with some minor dark pitting at the muzzle. The lock has an overall mottled bright appearance. The very fine, totally original silver is taking on a dark aged patina. The gold is fine. The stock is also very fine showing some minor handling marks with overall crisp checkering. Mechanically fine. An extraordinary example of a high quality Ottoman Empire flintlock pistol with gold inlay and silver furniture. 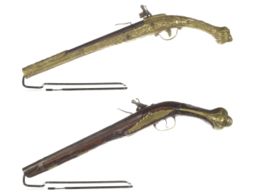 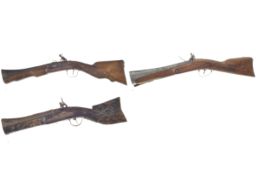 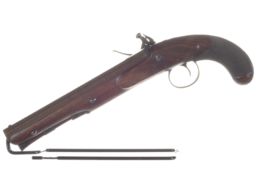 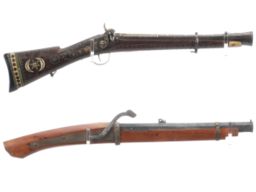 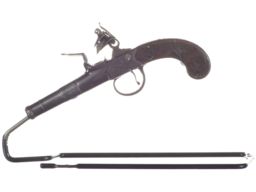 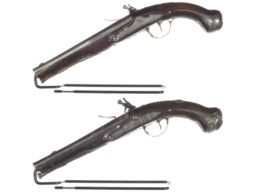