1) 16th Century German Infantry Style Spear. This spear is styled in a pattern similar to many German infantry spears of the late 16th and early 17th centuries when formations of pike armed infantry were dominating Europe's battlefields. This particular example may have had its shaft shortened for display purposes or for better use in rugged terrain. Many full size European pikes were shortened for use in the Americas during the early periods of colonization in the 17th century. The head is generally leaf shaped at the wide base that has two downward hooked lugs and trails upward to a diamond shaped needle-like point, perfect for puncturing the plate armour of the period. It measures 90 5/8 inches overall and the head is 17 1/2 inches. 2) Steel 15th Century Style "Morning Star" Flail. This is an example of what is often called a "military flail". These weapons usually consisted of a short shaft with a heavy ball, sometimes studded or spiked, attached via various lengths of chain or leather. Historians tend to disagree on whether or not such weapons ever existed at all, but the general consensus seems to be that if they did they were not widely used. This example consists of a 16 inch steel shaft with grip swells. Steel ball with three seven spikes is attached to the shaft with a 2 1/4 inch, two-link chain.

1) Very good, the head showing a mix of grey and brown patinas and a slight bend. The period shortened or modern replacement shaft is very good with a slightly worn black finish and minor handling marks scattered throughout. 2) Fine, showing mostly a grey patina overall with some scattered mild pitting and old filing marks on the shaft. An interesting example of a rarely seen weapon! 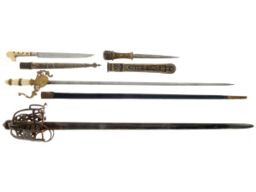 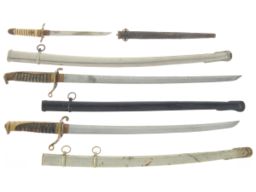 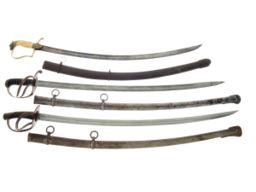 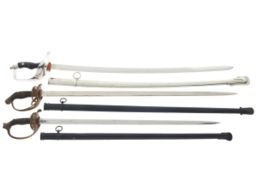 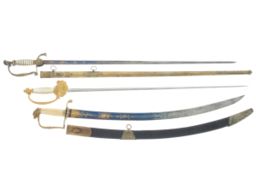 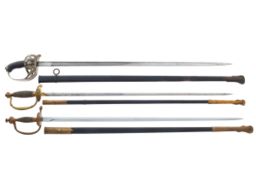