From the 1760s to his death in 1822 Jacob Dickert was both a military contractor and a respected Lancaster County, Pennsylvania, gunmaker. Dickert was born in Germany in 1740 and arrived in the colonies in 1748 with his parents. He is believed to have made weapons for the Continental Army and the Commonwealth of Pennsylvania during the revolution, but his first known contract is dated 1792. He owned a gun barrel boring mill a few miles from his gun factory in Manheim Township. He later took his grandson on as an apprentice and then business partner. Dickert's rifles are rare and highly sought after today. Pictured and discussed on page 310 of "American Military Shoulder Arms, Volume II: From the 1790s to the End of the Flintlock Period" by George Moller, and the signature of the rifle is shown on page 312. He states: "This very plain brass-mounted Jacob Dickert rifle is attributed to Pennsylvania militia purchase during the War of 1812." This rifle has his subtle "GDM" collection mark ahead of the toe plate. The barrel has traditional low profile blade and notch sights and is signed "J [crossed tomahawk and arrow touch mark] Dickert" behind the rear sight (see page 81 of "Thoughts on the Kentucky Rifle in Its Golden Age"). The muzzle section is turned down to tapered round ahead of the forend tip for a socket bayonet. Moller notes that the bayonet used with it may have been friction fit or secured by a set-screw. A socket bayonet made to fit the rifle is included. The lock is signed "SWEITZER" (backward Z). It has a plain single trigger and is mounted with brass furniture including a simple patch box. The curly maple stock is nicely figured but plainly finished and has an incised line border on the cheek rest. Provenance: The George Moller Collection

Very good as restored and reconverted to flintlock configuration with gray and brown patina, mild pitting at the breech, aged patina on the brass, several rectangular spliced repairs in the stock, nice flame figure concentrated showing through dark finish, some thin cracks, chip by the vent, and general mild wear. Mechanically fine. 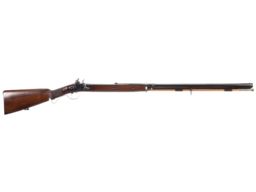 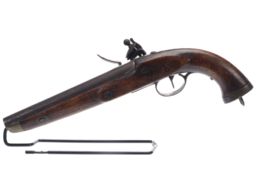 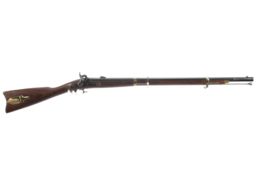 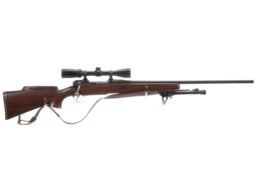 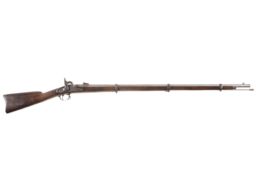 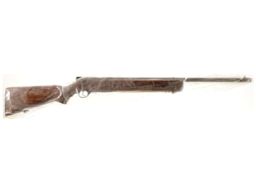