Offered here is a factory presentation inscribed Registered Magnum revolver presented by S&W Vice President Douglas Wesson to Sam Myres. The accompanying factory letter confirms the registration number (409), 8 3/4 inch barrel, blue finish, square notch rear sight and presentation inscription on the right side plate. The inscription reads, “Sighted in for/SAM D. MYRES/by/MAJOR D.B. WESSON.” The revolver had a King red post on reflector ramp base front sight and checkered walnut grips with grip adapters attached when it was shipped on September 3, 1935, and delivered to S.D. Myres of El Paso, Texas. The revolver was sighted in at 25 yards using .357 Magnum ammunition at a 6 o’clock hold. Born in Texas in 1871, Sam D. Myres, AKA Tio Sam, founded his famed saddlery and leather business in Sweetwater, Texas, in 1897 and offered some of the country’s finest saddles money could buy. His Spanish speaking friends gave him the nickname Tio or Uncle because his bearded face reminded them of the American character Uncle Sam. A humbled Myres said, “I want to do the job right. I don’t want to make them ashamed they asked me to lead the parade.” And he did just that. In 1916, the S.D. Myres Saddle Co. produced the world’s most expensive stock saddle. With a sticker price of $10,000 (roughly $230,000 in today’s money), the saddle featured fine tooling, gold, silver and 247 diamonds. During World War I, the company turned out 5,000 saddles for the U.S. government, receiving a citation from President Woodrow Wilson for superior quality that went well above specifications. As stated by the government, “The saddles produced by this contractor were of such good quality and workmanship that inspection was only a matter of form.” The master marksman Ed McGivern was known to draw his weapons from Myres holsters. The legendary World War II General George S. Patton wore a Myres holster on a Myres belt. The general’s holster for his Colt Single Action Army became almost inseparable from the image of the American war icon. A quick draw leather holster designed by the company became standard issued equipment for the FBI. These are just a few anecdotes from a long and proud history of the company that Myres founded. Myres should also be remembered as a civic leader. During his tenure as mayor of Sweetwater, the city government was reorganized and the city was modernized with paved streets and sidewalks and the addition of a city hall and fire station. He died in 1953. Smith & Wesson was well acquainted with Myres and his company. Three included documents (photocopies) confirm the relationship. The first is an advertisement for the S.D. Myres Saddle Co. store listing S&W revolvers for sale. The second is a September 1943 dated letter from S&W informing a buyer where to obtain a holster. The S&W sales manager lists three leather companies, which includes S.D. Myres. The third and most important document is letter dated January 1942 that is from S&W employee Cy Bassett to Sam Myres. In the letter, Bassett expresses that Douglas Wesson will directly contact Myres in the near future. This letter verifies that Douglas Wesson had a personal relationship with Sam Myres. Each S&W Registered Magnum was built to the specifications of the buyer, then registered by number to the owner by Douglas Wesson himself, the then Vice President of S&W. This is one of only 735 Registered Magnums manufactured with an 8 3/4 inch barrel, and it features a pinned blade front sight and standard S&W factory markings with “REG. 409” stamped on the yoke. Matching serial numbers are stamped on the butt, ejector shroud and cylinder. The assembly number “4376” is stamped on the yoke and crane. It comes with an exquisite full coverage floral tooled holster manufactured by S.D. Myres Saddle Co. It is accompanied by consignor research that includes several photographs of Myres, 5 Myres Co. catalogs, Sandra Myres’ “S.D. Myres: Saddlemaker” and related documents such as letters, newspaper articles and memos. The included article (photocopy) in the March 1951 issue of "The Horse Lover Magazine" has a photograph of Myres holding this revolver. The accompanying June 1952 issue of "The Texas gun Collector" (photocopy) references this revolver as being owned by Sam D. Myres.

Extremely fine. The revolver retains 95% plus original blue finish showing some holster type wear to the barrel, a cylinder drag line and some minor handling marks. Nearly all of the original case colors remain on the hammer and trigger. The undersized replacement grips are very good with a small chip missing near the bottom (left panel) and typical age cracking. The panels have attractive grain pattern and color. Mechanically excellent. The holster is very fine showing little signs of wear. This revolver links the histories of two great American companies. If you are looking for a one-of-a-kind piece of American firearm history, this is it! A definite must have for the serious Smith & Wesson collector! 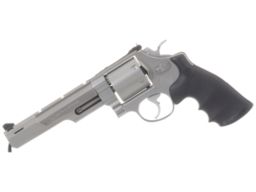 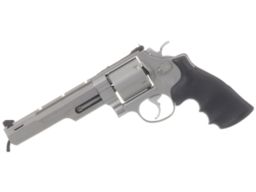 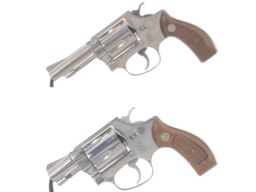 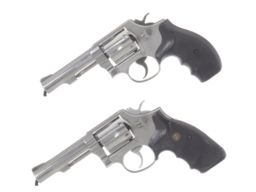 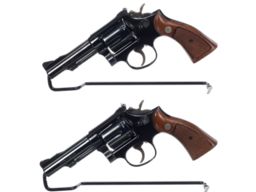 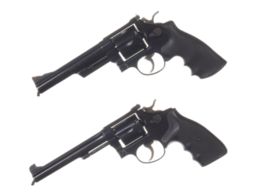