This U.S. Springfield Model 1795 musket was one of approximately 6,920 manufactured in the year 1813. At this time, these muskets were typically rushed into service during the turmoil of the War of 1812, although this example appears to have been used lightly when compared with most surviving specimens today. Springfield Model 1795 Type III muskets are described on pages 47-53 of George D. Moller's book "American Military Shoulder Arms Volume II" with this exact musket pictured on pages 48, 49, and 51. The caption next to the picture of the buttstock of this musket on page 51 states, "The buttstock configuration introduced in 1813, which was used for less than a year, had a poorly defined cheek recess." The lock plate is dated "1813" at the tail and marked with the script "US" over the federal eagle and shield emblem above a downward curved "SPRINGFIELD" at the center. The buttplate tang is dated "1813" at the front and marked "45" at the rear. The barrel has a bayonet stud on top near the muzzle. "SNY" (State of New York) and "US" marked with "P/eagle head/V" proofs at the breech. Brass blade front sight on the rear strap of the front barrel band. Sling swivels are mounted through studs on the middle band and trigger guard finial. "US" is marked in script on the left stock flat. "SR" inspection initials marked behind the trigger guard tang. Initials "IA" carved into the right of the buttstock. "GDM" (George D. Moller) collection initials marked at the toe of the stock. Includes a US socket bayonet and Watervliet Arsenal leather sling with an arrow cut out of it ahead of initials "EH" carved into it. Provenance: The George Moller Collection

Fine with scattered dark pitting on the otherwise smooth bright surfaces of the barrel and fittings, with sharp markings in the metal and defined edges on the lock. Stock is also fine with attractive raised grain and defined edges with some scratches and a few scuffs, a chip on the left of the barrel channel, a chipped section on the right of the ramrod channel, some chips around the barrel tang, a few chips behind the lock, carving as mentioned above, and crisp markings. Mechanically excellent. Included bayonet is fair with scattered mild pitting, and sling is very good with some light cracking and initials/cutout section as mentioned above. This is an attractive example of a War of 1812 era U.S. Springfield Model 1795 musket that would make a fine addition to any U.S. Martial collection! 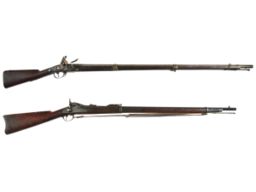 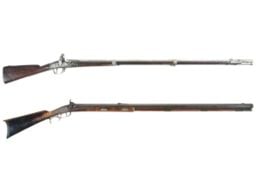 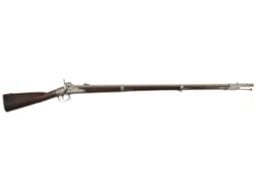 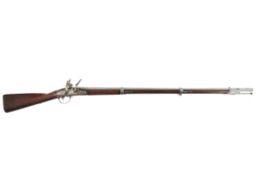 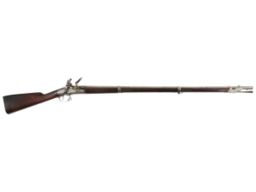