Manufactured in 1908. The accompanying factory letter confirms the 6 inch barrel in .38 caliber, blue finish, (Factory Engraved:) Mexican eagle stamped on top of the slide, and pearl grips, and was one of 600 pistols sold to the Mexican government and shipped to the Mexico City, Mexico, dealer A. Combaluzier on February 27, 1908. This pistol correctly falls into the serial number range (30631-31612) of the 600 Model 1902s with pearl stocks and Mexican eagle slide stamp purchased by the Mexican government as identified in William Goddard's "The Government Models" on page 184. The Mexican government later purchased an additional 200 Model 1902s for a grand total of 800 pistols with pearl stocks and Mexican eagle slide stamp. "Although 800 pistols were produced," wrote Douglas Sheldon, "apparently few have survived and even less have returned to the United States" (see "A Collector's Guide to Colt's .38 Automatic Pistols," page 116). The pistol has the square butt, slide lock on the left side of the frame, lanyard swivel and eight-round magazine that distinguish it from the Colt Model 1902 "Sporting" pistol. Features rear slide serrations, blue barrel and unmarked blue magazine. The left side of the slide is marked with the standard two-block two-line patent dates and Hartford address, with the circled Rampant Colt behind the serrations. Standard two-line caliber markings on the right side of the slide. The left side of the trigger guard bow is stamped with a "6" assembler's mark on the lower rear and the Colt "VP/triangle" proofmark on the front top. The top front of the slide is factory roll marked with a Mexican snake and eagle/wreath marking. Fitted with smooth pearl grips. Comes with five framed photographs depicting life in Mexico in the early 20th century and an unmarked tan flap holster with the name "LOUIS S. CATES" as well as "PARRAL"(a city in Mexico) handwritten on the inside of the flap. Per included research complied by the consignor, Louis S. Cates (1881-1959) was an American mining engineer and businessman who received his mining engineering degree from the Massachusetts Institute of Technology in 1902 and started his career in the mining fields of Parral, Mexico. He later moved to Utah taking a job with the Boston Consolidated Mining Co. where he was made manager in 1910 and played a major role in the development of the Bingham mine. He went on to hold several high level positions with mining companies operating in the southwest until he eventually became president of Phelps Dodge Corporation, and under his leadership from 1930 to 1947, Phelps Dodge became the third largest copper producer in the world. Provenance: The Doug Ellison Collection

Fine. 40% plus original high polish blue finish remains with the balance a mix of gray and brown patina. There is some scattered pin prick type pitting. The grips are also fine with some very minor chipping and cracking. The markings are crisp and clear. Mechanically excellent. The holster is also fine with much of the original brown polish, some mild flex cracking, some minor wear, and tight stitching. 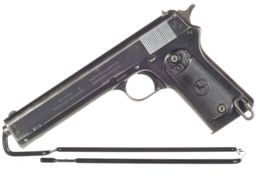 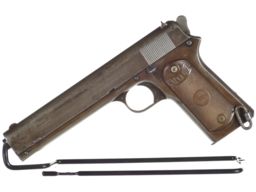 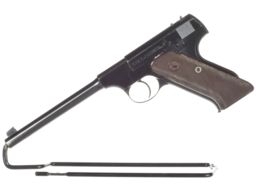 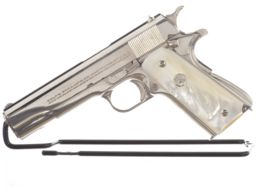 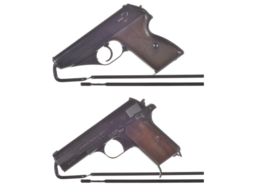 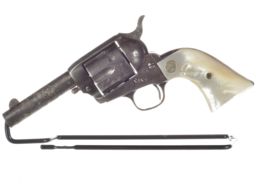