This pistol falls within a large block of Colt Government Model pistols shipped to the British Ministry of Shipping in early 1919, right after the conclusion of World War I. Many of these pistols, like this example, were initially issued to Royal Air Force personnel before many were reissued in 1942 to Royal Navy sea/air rescue units. The left side of the slide has the Rampant Colt between the patent dates and Colt address, each in two lines. while the right is marked with the .455 caliber marking. The right of the frame has the Government Model marking over the "W" prefixed serial number. British military proofs are visible on multiple parts, as well as "R.A.F." on the left of the frame. British proofs are visible on both sides of the barrel lug which has a polished chamber. The pistol is fitted with fixed blade and notch sights, diamond pattern checkered grips, and a two-tone magazine with "CAL.455/ELEY" and a lanyard ring on the base. Provenance: The Gus Cargile Collection

Fine, retains 80% plus of the period arsenal refinished blue with the balance having thinned to mostly a smooth grey patina, primarily on edges and the grip safety. The grips are good with a repair/filler at the bottom of the left panel, some scattered minor dings and scratches, and crisp checkering overall. Mechanically functions fine, although it occasionally drops the hammer to half cock when the slide is released. 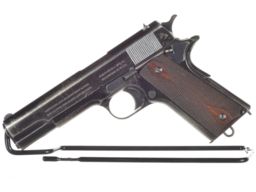 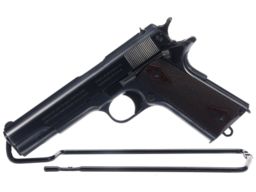 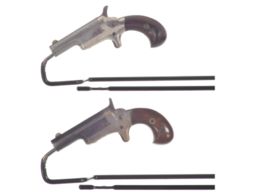 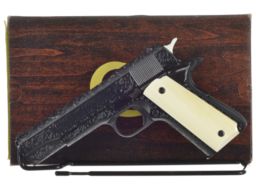 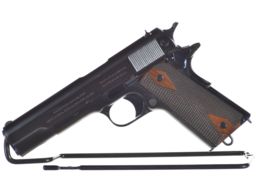 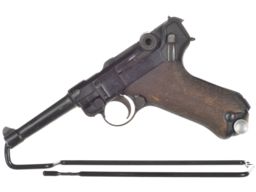