A number of related documents are included with this rifle, among them a letter from the Springfield Research Service identifying it as a U.S. International Rifle Team competition rifle. While chiefly armed with variants of the 1903 Springfield during that period, the superior lock time of the Martini design was seen as giving rival teams a slight edge in competition. Reaching out to the Hammerli firm in Switzerland, the Ordnance Department procured about 40 Martini rifles which were extensively reworked at Springfield including the installation of match barrels and new internals. The tenure for these rifles was about 1928-1933, when the Americans were running neck and neck with the Swiss and the Swedes for top dog in full power free rifle shooting. One of the big names on the American side was William "Bill" Bruce, a civilian shooter and noted record setter, and some of the included documentation (in particular a copy of a 1933 letter from the Ordnance Department to Bruce, on the subject of procuring his match-used rifle as surplus) indicates this rifle by serial number (found on the front of the receiver, beneath the forearm) as the one used by Bruce while upholding America's reputation as a nation of rifleman on fields in America and abroad. Globe front and peep rear sights, with a pair of mounting blocks on the barrel, and the receiver marked with the Hammerli address and "hammer" logo. The receiver is equipped with a double set trigger, an elaborate handrest triggerguard, and a smooth hardwood palm rest with multiple points of adjustment. The stock is of the "American Schuetzen" pattern, with an adjustable front sling swivel, right handed cheekpiece and thumbrest, brown leather sling, and an adjustable, interchangeable buttplate. A small (1/4") "GDM" (George D. Moller) collection stamp has been added to the belly of the stock between the rear swivel and the buttplate. Two steel buttplates are included, both with the "Swiss hook" profile, though slightly different proportions, one unmarked, and the other marked "1065". Also included with the documentation are several vintage photographs of American shooters and shooting teams (including some explicitly identifying Bruce in the photo) and a grouping of shooting medals attributed to Bruce. Provenance: The George Moller Collection

Very fine, with 85% plus arsenal refinished blue finish, showing covered-up dings and pits, scattered edge wear and handling marks. Two extra drilled and tapped holes are present on the left side of the receiver. The stock is also very fine, showing mild dings and dents, and the sling shows cracking and verdigris buildup appropriate to age and use. Mechanically excellent. 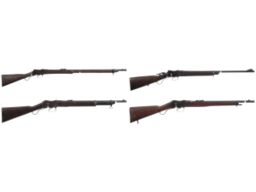 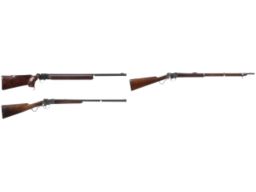 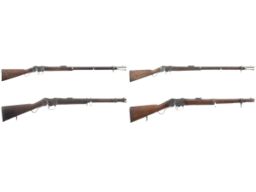 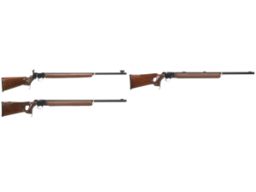 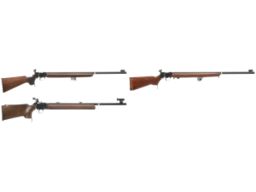 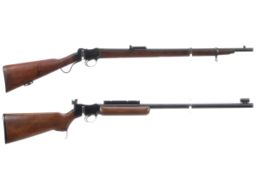