Developed shortly before the outbreak of World War One, the Chauchat (also labeled the "CSRG" for Chauchat, Sutter, Ribeyrolles and Gladiator) was the primary French light machine gun on the Western Front, while also actively used by the American Expeditionary Force until the 1918 BAR came online. Like so many pre-WWI weapons and tactics, the Chauchat had trouble in the trenches, with the Gladiator-made American 30-06 model being a source of stress through nearly the entire conflict. Sidarme, which produced exclusively for French contracts, had a healthier reputation, and the French used their 1915s chiefly in the "squad automatic" role to provide suppressing fire for rapid advances, often lighting up opposing heavy machine gun nests to keep the gunners heads down while grenadiers closed the distance to blast them out. Later phased out in favor of the FM 24 machine gun, some Chauchats were still in the French inventory at the start of World War II, where 3rd line units used them against the German breakthrough. At the outbreak of the Winter War between Finland and the Soviet Union, around 5,000 1915s were donated by France to the Finns, and while they did not arrive in time for the Winter War they did serve in the Continuation War. Blade front and tangent rear sights, both offset to the left, with the left side plate marked "SIDARME" over "C.S.R.G." ahead of the Finnish "SA" inspection mark. A semicircular magazine attaches to the underside, with a three position "S/M/C" selector switch, hinged bipod, dual pistol grips and a hardwood buttstock. A green canvas sling is fitted to the receiver, and a set of clamp on post and "spider web" anti-aircraft sights are mounted to the standard sights.

Very good as deactivated, with 80% of the refinished blue finish, showing covered pitting, a number of light scratches and dents, and mild handling marks overall. The wood shows a number of scratches and dents, but is otherwise fair. The breech of the barrel has been welded shut, and a separate weld was performed on the bolt face to block the firing pin, but the bolt is still mobile and the action is in good order. NOTE: This is a registered DEWAT weapon with the Bureau of Alcohol, Tobacco Firearms and Explosives (BATFE), as a National Firearms Act (NFA) weapon, that is fully transferable. It has been classified as a Curio or Relic as defined in 27 CFR, 478.11. These weapons are still subject to the provisions of 18 U.S.C. Chapter 44 and 27 CFR part 478. 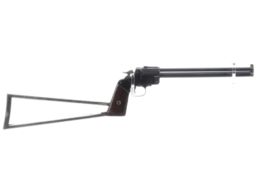 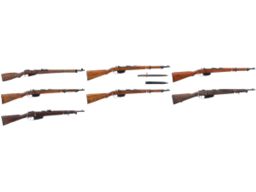 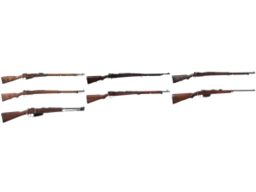 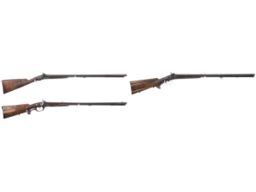 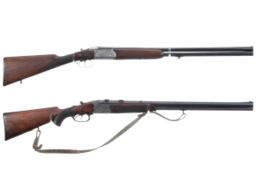