These Virginia contract Swan-imported Brown Bess style muskets are described on pages 272-275 of George D. Moller's book "American Military Shoulder Arms Volume II" in which a similar example is pictured on page 273 next to a caption that states, "The muskets delivered under contract by Colonel James Swan to Virginia in 1799 and 1800 were probably fabricated in one of the northern German states near Hamburg. These muskets were loosely configured to pattern muskets made in Virginia, based on the British Short Land Pattern musket." Page 273 of the book also states, "In December 1824, 4,015 of these muskets were in storage at the state's armory. They were described as brass-mounted muskets with bores somewhat smaller than the standard .69 caliber. In 1833 many of these muskets were broken up and sold for scrap." Faintly marked with Virginia Regimental markings on top of the barrel at the breech that appears to read "72 Va. REGa. RUSSELL." in reference to the 72nd Virginia Regiment, which was based out of Russell County, Virginia. The lock is unmarked besides a small "TF" in between the spring. Added layer on the rear surface of the frizzen. "GDM" (George D. Moller) collection initials marked at the toe of the stock. Includes a period leather sling. Provenance: The George Moller Collection

Good with brown patina overall, scattered light pitting, moderate flash pitting, and some scattered dings at the breech. Brass retains an attractive golden aged patina. Stock is good as sanded and re-oiled with general overall wear, numerous scattered scratches, dents, chips, cracks, and slightly undersized at the edges. Mechanically needs work, the hammer will only stay back in half cock. Included sling is very good with some light cracking. 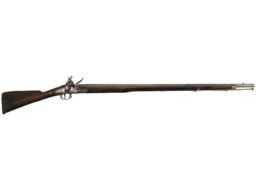 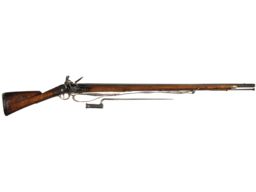 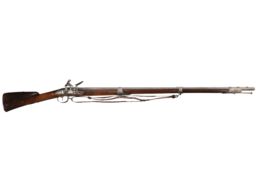 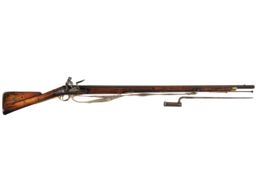 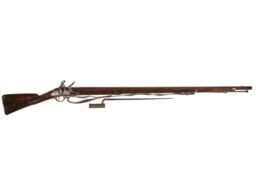 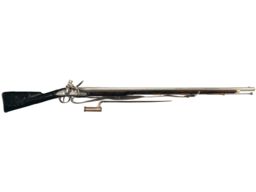