This sword with "CSA" cast into the brass guard is one of the most distinctive and desirable designs of Confederate swords known. Louis Froelich, a Bavarian immigrant who established himself in North Carolina in 1861, worked briefly as a button maker before establishing the Wilmington Sword Manufactory, later known as the Confederate States Armory in Kenansville, North Carolina. The output of the Arms Factory included a wide assortment of leather gear and martial accoutrements, in addition to a full spectrum of Confederate edged weapons, including swords and lances. During the course of the war, Froelich would need to rebuild his factory three times, once due to fire and twice due to Union attack. The blade of this example measures 28 1/2 inches long with single fullers. The grip is black oilcloth secured with a steel wire wrap, brass ferrule and pommel, and "XXVIII" carved into the edge of the guard as well as on the throat of the included brass fitted iron scabbard. An example is pictured and described on pages 16-17 of the addendum section of the book "A Photographic Supplement of Confederate Swords With Addendum" by William A. Albaugh III, and these swords are also described with an illustration on page 26 of "Confederate Edged Weapons" by William A. Albaugh III.

Good with genuine dark patina on the blade with scattered light pitting and some chips on the sharp edge. Guard retains an attractive original golden aged patina. Scabbard is fair with brown patina and scattered mild pitting on the iron, and a pleasing untouched dark patina on its brass fittings. 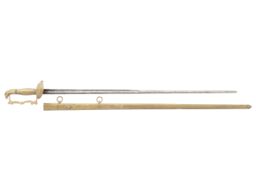 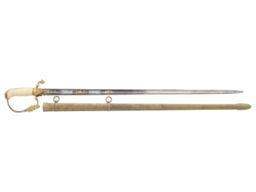 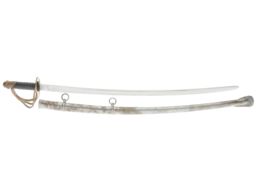 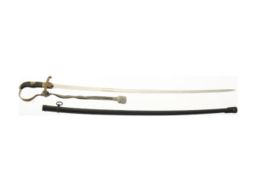 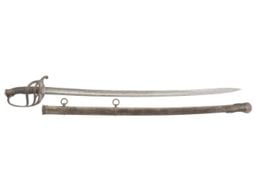 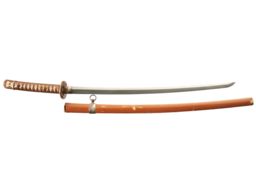