This is a desirable example of an early production 1858 dated Whitworth rifle. The Whitworth is widely considered to have been the first rifle used for true sniping. They were reportedly accurate up to 1,800 yards or more. At 1,800 yards, the rifle was recorded with groupings less than twelve feet which was acceptable when targeting groups of soldiers and officers. At shorter distances, such as 500 yards, the Whitworth was far more accurate with tight groupings under 4 1/2 inches compared to the Enfield's more than 25 inch groups thanks to its polygonal hexagonal rifling using specially fitted bullets in the shape of the rifling; both of which were originally patented by Joseph Whitworth under his British patent number 2,525 dated December 1st, 1854 and British patent number 903 dated April 23rd, 1855. The Whitworth rifle is best known for its use by Confederate sharpshooters during the Civil War, of which only approximately 250 Whitworth rifles are believed to been sold to the Confederate Army in total; the small amount of these rifles in use were well known and feared. Union General Sedgwick fell victim to a head shot from a sniper using a Whitworth rifle on May 8, 1864. Shortly before General Sedgwick was killed, he scolded some of his men for ducking gun fire, telling them that "they couldn't hit an elephant at this distance." This rifle has a fixed blade front sight that doubles as a bayonet lug, notch and ladder rear sight, Birmingham proofs as well as "52" bore markings on the left at the breech, "JOSEPH WHITWORTH PATENT" marked on top of the barrel ahead of the rear sight, "crown/W" marked at the tail of the lock and "WHITWORTH/1858" marked at the center of the lock, smooth trigger, full length stock, and sling swivels located on the replacement front barrel band and tail of the trigger guard tang. "F PRESTON/MANCHESTER" marked on the ramrod, and "F PRESTON" marked on the left of the rear sight base. The replacement front barrel band has a hole on either side and a star surrounded by a crescent moon marked on the left side. Matching serial number "170" marked on top of the barrel at the breech, on the rear sight ladder, and inside of the lock. According to the consignor, they previously reached out to Bill Curtis (passed away this year) of the English Whitworth Project, and Bill indicated this early serial numbered example is included as one of the very few surviving examples of the first 200 Whitworth rifles used in experiments and testing, and also indicated that the trigger guard of this example is unusual and may be meant to mate with a shooting rest. Weight: 8 lbs. 5 oz. (lighter than a Pattern 1853 Enfield that most later Whitworth's matched)

Very good with smooth brown patina on the barrel, smooth gray and brown patina on the lock, and strong traces of original blue finish on the rear sight ladder, and sharp markings. Stock is fine with attractive grain and defined edges, a chip at the left of the barrel tang, scattered moderate dings around the barrel tang, a chip on the underside beneath the left flat, a long scratch on the underside of the buttstock, a chip and a minor crack at the toe. Mechanically excellent. 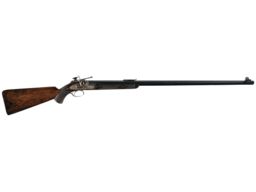 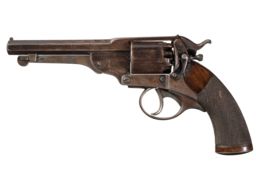 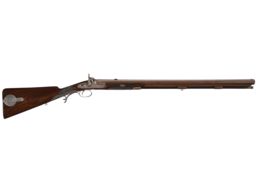 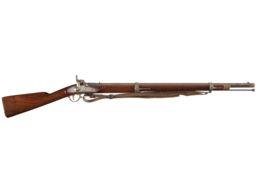 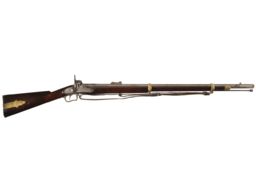 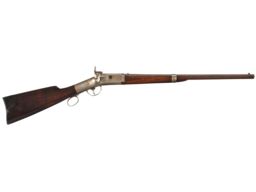