Excellent plus, exhibiting an exquisite, untouched appearance with finish loss reserved to flaking on the cylinder. 98% of the extremely deluxe, special order high-polish blue finish on the barrel, ejector housing, back-strap and trigger-guard. 40% blue remains on the cylinder; the loss of which is due to flaking, not age or use, and its balance exhibits an attractive gray and light brown patina. 99% bright and extremely vivid case colors remain on the hammer and frame; the best we have ever seen on any Colt Single Action. Beautiful, strong niter blue on minty screws and trigger. The gun was handled very little and shows only a few minimal light spots mainly on the barrel at the breech end and a few lightest scratches and marks. The grip is also near mint and has beautiful burl figure and retains virtually all of its deluxe piano varnish finish, so perfect that the grips appear to be coated in glass with the most minor edge and handling wear. The gun has the visual appearance of a piece of fine jewelry. Mechanically excellent. The bore is like a mirror. The case is very fine and has mild age and storage related wear including from contact with the cylinder and hammer. The interior of the case is excellent. Ammunition from the case is fine with mellow aged patina. The cartridge box is very fine with a bright label with clear markings, some open seams on the lid, and mild wear and is extremely valuable in its own right. Ominously, the cartridge block in the case holds 50 cartridges, with just one is missing. This is an absolutely stunning early Colt Single Action Army presented by the most famous handgun maker in the world to one of the most important figures in American Military history. Carpe Diem! 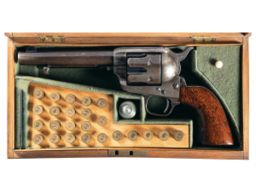 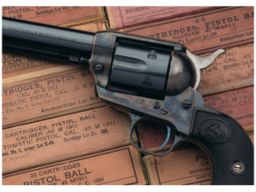 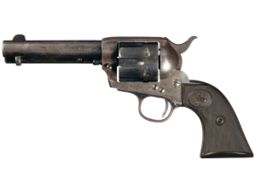 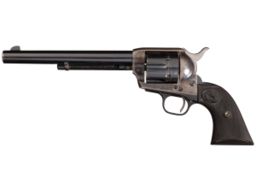 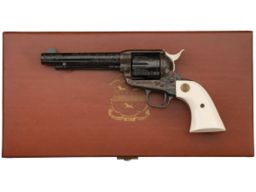 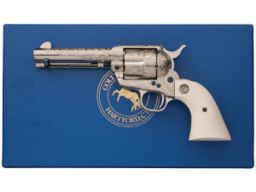