Manufactured in 1893, this is a superb example of late 19th century Marlin artistry made more desirable with a rear sight designed by well known Western frontier gunsmith Frank W. Freund. The casehardened receiver is decorated with attractive factory floral scrollwork on a punch dot background, light scroll and line borders and a game scene depicting a stag in a circular panel on the left side. The motif is very similar to Marlin's No. 1 pattern as illustrated in Brophy's "Marlin Firearms" on page 531. At the time this rifle was manufactured, famed Master Engraver Conrad Ulrich, who spent a lifetime embellishing some of the finest high art firearms of the late 19th century to early 20th century, did most of the engraving for Marlin, and the embellishment on this rifle certainly follows a standard well-known Ulrich pattern encountered on Marlin arms. The barrel is fitted with a combination Beach front sight and a highly desirable Freund elevation adjustable "V" notch rear sight with insert. Like many in the American firearms industry in the 18th and 19th centuries, the Freund brothers Frank W. and George were German immigrants. They had various temporary shop locations as they followed the Union Pacific Railroad westward and established more permanent shops in Denver, Colorado, and Cheyenne, Wyoming, where they regularly modified firearms, particularly Sharps rifles, to fit their customer's needs. They sold rifles to the likes of Philip Sheridan, George Cook, and Theodore Roosevelt. In addition to mechanical alterations and creating new configurations, the Freunds also designed and patented new sights. The rear sight on this rifle is marked "F.W. FREUND/PATENTED." The top barrel flat is stamped with the two-line legend and "38-W." "MARLIN SAFETY" is marked on top of the receiver. The highly figured deluxe walnut forearm and pistol grip stock feature multi-point checkering. The buttstock is fitted with a casehardened crescent buttplate. The accompanying factory letter confirms the 24 inch octagon barrel in .38 caliber and pistol grip stock. The factory letter also states the rifle was shipped on February 9, 1893. Although not confirmed by the factory letter, the engraving and deluxe checkered pistol grip stock are definitely factory. As noted Marlin expert William Brophy explained, "Unfortunately, the few remaining factory records do not, with any regularity, indicate if the gun was factory engraved or not." Factory engraved Model 1889s are rare, with high condition examples like this one being even rarer. Provenance: The Milan J. Turk Collection 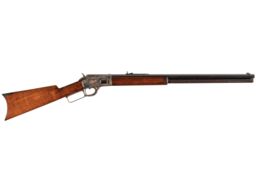 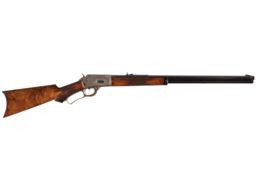 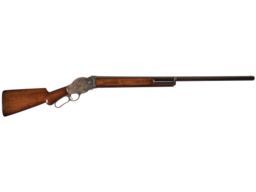 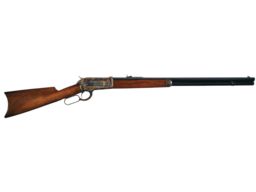 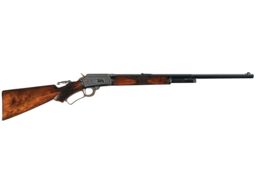 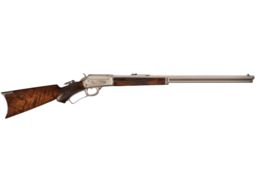