Manufactured after 1906 and featuring factory engraving. As Marlin experts and collectors already know, factory engraved Deluxe Marlins are a rare find, especially the Model 1894, but factory engraved Marlin carbines are even rarer than their rifle counterparts. In fact, this is the first factory engraved carbine of any Marlin model of the last half of the 19th century to early 20th century that we have cataloged. Acknowledged by expert collectors, only five factory engraved Model 1894 carbines are known to exist. The receiver is decorated with profuse factory floral scrollwork on a punch dot background along with light scroll and line borders. The scrollwork on the left side of the receiver surrounds a circular panel game scene depicting a foraging stag. The embellishment is very similar to Marlins No. 3 pattern as illustrated in Brophy's "Marlin Firearms" on page 531. Light scrollwork also appears on the barrel sides at the breech. Conrad Ulrich engraved most of the work for Marlin c. 1881 to 1910 while his son, Alden George Ulrich, engraved for Marlin c. 1905 to 1919. The Marlin patterns, including the motif featured on this carbine, were established by Conrad Ulrich and were influenced by the works by renowned 19th century master engravers L. D. Nimschke and Gustave Young. The top of the barrel is stamped "-Marlin Firearms Co., NEW-HAVEN, CT. U.S.A.-/-PAT'D OCT. 11. 1887. APRIL 2. 1889. AUG. 1. 1893.-" ahead of the rear sight and "25-20 M" at the breech. The top of the receiver lacks the "Marlin Safety marking" and is instead scroll engraved. The receiver lacks the standard saddle ring. The absence of the saddle ring is another special order feature. The carbine is fitted with a beaded blade Marble front sight, a folding elevation adjustable notch rear sight, and a folding tang peep sight. Sling swivels are attached to the underside of the rear barrel band and buttstock. The multi-point checkered forearm and straight grip stock are select walnut. The buttstock is fitted with a carbine buttplate. Provenance: The Milan J. Turk Collection

Exceptionally fine, retaining 85% original blue finish with thinning to brown on the balance. The engraving is crisp. 40% original case colors remain on the hammer and lever. The wood is fine with numerous scattered minor dings and scratches, much of the crazed original varnish remaining and overall crisp checkering. Mechanically excellent. A highly attractive factory engraved Marlin Deluxe Model 1894 carbine that will be a worthy addition to any lever action or high art firearms collection. It will likely be a long time before we see another! 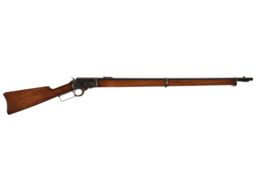 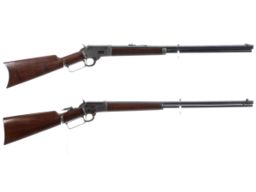 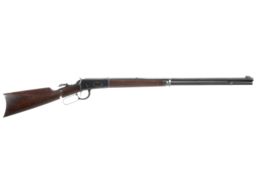 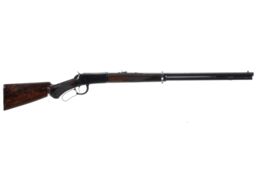 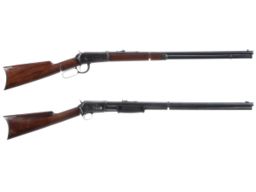