Rock Island Auction Company is pleased to present this one-of-a-kind late 19th century Marlin single shot prototype rifle intended to replace the Ballard. Invented by Charles Ballard of Worcester, Massachusetts, the Ballard rifle was manufactured by five different firms and may have had a short and uneventful history if not for Marlin taking up production in 1875. As the backbone of the Marlin line from 1875 to about 1890, the Ballard rifle was perfected by Marlin to become, in the words of single shot expert and author James Grant, the "most famous and beloved of all old single shots." Because of Marlin’s engineering efforts the popularity of the Ballard was only shared with the world’s finest single shot target and hunting rifles offered in the last half of the 19th century. A dedication to design led Marlin to prefect the Ballard rifle as seen here with this superb prototype single shot rifle. The rifle certainly follows the high quality standards one is accustom to observing in Marlin work at this time, even rivaling that of Hepburn’s prototype lever actions we are also offering in this auction. The discovery of this prototype occurred circa 1969 when it was found in a walk-in safe in a crate with other Rifles at the Marlin plant. At the time William Brophy was the company historian and he purchased the rifle from Marlin. The rifle is pictured and identified in Brophy's "Marlin Firearms" on pages 137 and 143-144. Brophy identified the single shot rifle as "a Marlin prototype to replace the Ballard." "An interesting conclusion to The Marlin Fire Arms Company's manufacturing single-shot rifles for sporting and target use is the comment made by E. Hough in a report he did about the Marlin exhibit at the 1893 Chicago World's Fair," wrote Brophy. "After glowing remarks about the many fine Marlin rifles, their beauty and excellence in engraving and wood, Mr. Hough stated: 'The Marlins show a single-shot which they think will be better than the old Ballard.' Illustrations shown here are of a single-shot rifle believed to be the rifle to which E. Hough refers. It has the outward appearance of a Winchester high-wall rifle, but is quite different on the inside. There are no markings to indicate the maker and there are no numbers on parts or pieces. The workmanship is superb and has the character of inventor L.L. Hepburn's work" (pages 143-144). We can attest that the craftsmanship is certainly stupendous, living up the high standards set forth by John Marlin and L.L. Hepburn, and it is unfortunate that shooting world never got to see if this single shot lived up to its predecessor. The full octagon barrel is fitted with a German silver blade front sight and an elevation adjustable rear sight. The barrel is about a no. 3 weight. As Brophy pointed out, there are no visible markings. The lever is like the Ballard serpentine style. The upper tang is not tapped. The barrel is blued. The remaining metal surfaces are casehardened. The uncheckered forearm and straight grip stock are walnut. The forearm has a Ballard style taper with slight Schnabel tip. The buttstock is fitted with a crescent buttplate. Provenance: The Milan J. Turk Collection 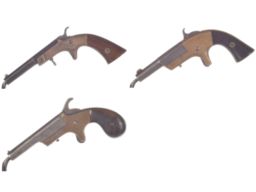 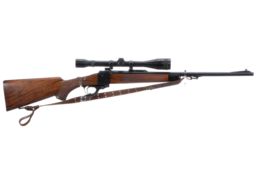 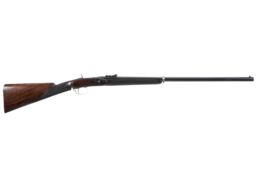 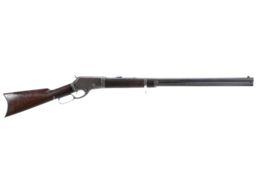 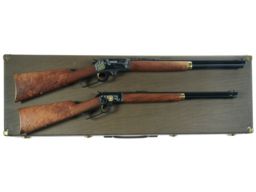