Remington-Keene rifles and carbines were manufactured c. 1880-1883. Keene's design was rather antiquated from the beginning, but their quality, interesting design, and rarity have made them highly sought after. A tubular magazine like those used on classic lever action rifles and many shotguns is fitted below the barrel. The magazine is loaded using a loading gate at the bottom of the action much like standard slide action shotguns. The hammer at the back of the bolt must be manually cocked for each shot. Production was limited in part due to competition with the Winchester-Hotchkiss rifles as well as the more modern Remington-Lee. This model was the first magazine fed rifle produced in quantity by Remington. They were used by the Indian Police and others in the West in the late 19th century. The vast majority of these were plainly finished and have straight grip stocks and round barrels. This exceptional rifle has a part-octagon barrel with a pinched blade front sight, a folding ladder rear sight with graduations up to "10" (1,000 yards), and scroll, floral, and border engraving. Coordinating engraving patterns extend to nearly all of the various parts; even the loading gate and part of the magazine tube have extraordinary exhibition quality factory scroll engraving. The engraving is highly detailed. The barrel, barrel band, action, and trigger guard are all blued. The bolt, trigger, and loading gate are finished bright. The hammer and buttplate are casehardened. The fancy grade, highly figured walnut pistol grip stock has checkering on the forend and grip, and a high gloss piano finish. Two arched arrows pointing clockwise are carved around the screw on the right side. The bolt has the E. Remington & Sons address and Keene patent markings. The butt compartment contains the takedown cleaning rod. Per an included photocopied letter from noted firearms historian R.L. Wilson, this rifle was formerly of the famed collection of American firearms designer and entrepreneur William Ruger (1916-2002) and is pictured on page 227 (5th from right) in Wilson's "Ruger & His Guns." In 1949, Ruger partnered with Alexander McCormick Sturm to establish Sturm, Ruger & Co. and had a hand in designing nearly all of his company's firearms from the semi-automatics to the single actions up until his death in 2001. Sturm, Ruger & Co. continues on with their co-founder's legacy by offering one of the world's widest varieties of firearms produced by any single manufacturer. As one observer put it, "There is a Ruger gun for virtually every sporting, personal-defense, military and police purpose. This unprecedented, unequaled and unsurpassed line is manufactured entirely in Ruger factories in America." Provenance: The William Ruger Collection; The Milan J. Turk Collection

Excellent with 95% plus original blue finish with some areas of light thinning and light brown patina, 75% vivid original case colors, some light spotting on the otherwise bright surfaces of the bright finished components, crisp markings and engraving, and only minor handling and storage related wear. The stock is also very fine and has crisp checkering, glossy varnish, attractive figure and grain, and a few minor dings and scratches. Mechanically excellent. This is the finest Remington-Keene rifle we have ever offered at auction with absolutely gorgeous engraving that would be impossible to improve upon. 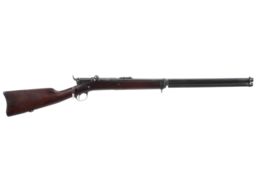 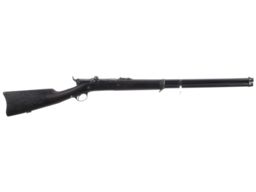 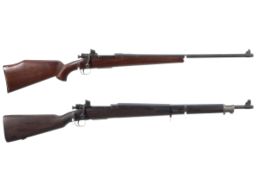 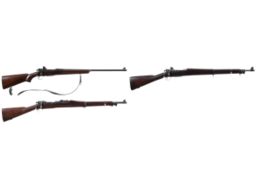 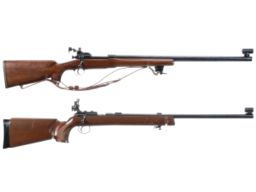 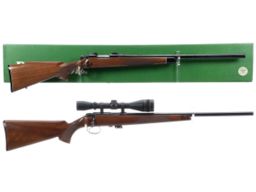