Manufactured in 1902, this pistol shows the late production features of the Model 1900, including the slide serrations at the front of the slide, which became standard beginning in December of 1900, and are rarely encountered on pistols over serial number 2000. It has the early/mid-production spur hammer which was replaced with a rounded hammer in December of 1901. Blade front and notch rear sights, the latter in the early, "sight safety" configuration, installed on a re-numbered to match slide with the re-engraved two-line/two-block "BROWNING'S PATENT" markings on the left side ahead of the circled Rampant Colt and caliber markings on the right. Fitted with a nitre blue trigger, early casehardened spur hammer, smooth hardwood grips, and a replated nickel finished magazine with "PAT'D. SEPT 9. 1884" marked on the base plate. Provenance: The Milan J. Turk Collection

Fine, retains 85% plus of the professionally restored blue finish with the balance having thinned mostly to a smooth grey patina, primarily in the form of edge wear and chemical type loss on the top front of the slide. The slide markings are all re-engraved (see above). The grips are very fine with some scattered light-minor scratches. Mechanically excellent. 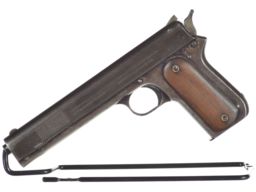 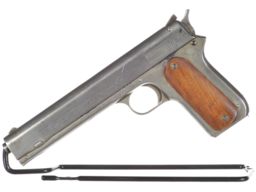 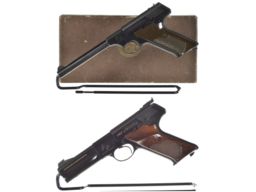 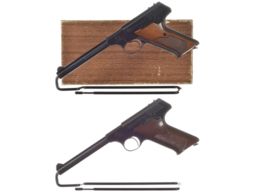 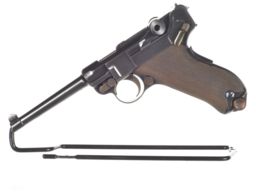 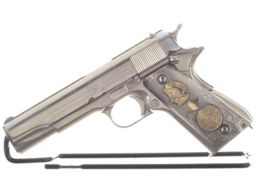