This is a beautiful example of a fairly scarce Colt 1903 pocket hammer pistol. These pistols were produced between 1903 and 1929 with the serial number interspersed between the 1903 hammerless and military models making it appear that there were more produced than actually were. However total production of this civilian model was approximately 26,000 with this pistol manufactured right at the tail end of the production in 1929. It is noted that the highest recorded serial number was "47226" with this actual pistol being serial number "47089". It has the standard two line/two block markings on the left side of the slide, "PATENTED/APR.29.1897 SEPT.9.1902 and COLT'S PT.F.A.MFG.CO./HARTFORD.CT.U.S.A." with the Rampant Colt logo behind the slide serrations. The serial number is on the left side of the frame directly above the trigger guard bow which is marked with a "1" inspector mark, over the Colt "VP" triangle proof. The right side of the slide is marked "AUTOMATIC COLT/CALIBRE 38 RIMLESS SMOKELESS". It is fitted with black checkered hard rubber grips with "COLT" markings at the top in a ribbon. It has the exceptional Colt pre-war blued finish with the Colt color casehardened finish on the hammer with an all blued magazine that is marked "CAL. 38/COLT". It is complete with the original and matching dark maroon, serial numbered box that is marked on the end; "POCKET MODEL/Colt Automatic Pistol .38 Rimless/Smokeless". The box is complete with both Colt factory labels still glued inside the box along with the original factory instruction sheet and shooting advertisement. Provenance: The Milan J. Turk Collection

Excellent plus with 99% original blue finish with just a hint of minor wear on the very front edges of the slide, obviously from just sitting in the box. The hammer retains 98% of its fiery case colors with just a hint of wear along the front edge where it engages the slide and the very face of the hammer, again probably just from limited dry firing, the breech face is still in the white, which indicates that it was probably never fired. Mechanically excellent. The box shows wear and a little tattering on the edges and corners, with a couple of the corners being broken out. The labels are mostly complete. Just an exceptional, near new example of a very low production Colt 1903 pocket semi-automatic. 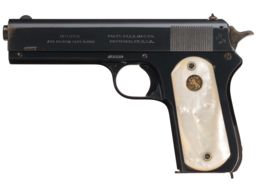 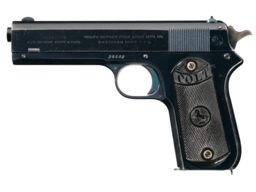 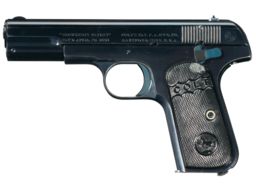 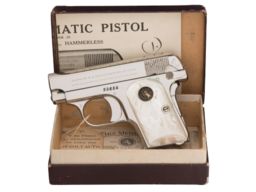 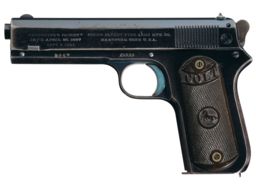 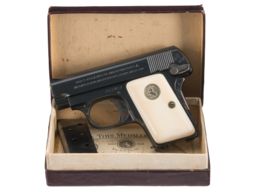