This is a unique example of an experimental/prototype M1 Carbine that was manufactured by the Underwood Elliott-Fisher Company. This is possibly the only one of its kind ever manufactured. It features a "sliding" recoil absorbing type buttstock design, although it appears to be incomplete and is missing the actual buttstock itself. There is a large cheek piece located on the left of the receiver that has a built in spring loaded system in which the missing buttstock section would use a recoil absorber (functions similar to lot 545 in this same auction) that also acts as a shield to conceal a flip-up blade that can be folded out to face rearwards and function as a bayonet. Throughout World War II, several of the Defense Companies produced numerous experimental type carbines based on the wartime needs of the U.S. Military. They usually set aside/reserved a specific block of serial numbers usually with a letter prefix of an X, E, or both, as preproduction examples or test models. Some concepts were acted on while others never left the prototype phase and did not make it to production. This example is serial numbered "E101" on the heel of the receiver, denoting it as an experimental carbine. These carbines were usually assembled from military contract parts and used both early and late production parts, with some bearing proofs while others were unproofed. It is estimated that approximately 50-100 of these various experimental carbines were manufactured by several companies, with the majority of the known examples manufactured by the Inland Division and Winchester Companies. The style of machining and parts appear to be of original World War II era and original to the carbine. This carbine has the standard "U.S. CARBINE/CAL .30 M1" markings on the front receiver ring with the rear area stamped "UNDERWOOD/E101", and the barrel is marked "UNDERWOOD/12-42/Flaming Ordnance Bomb". It is fitted with an early type II barrel band without sling swivel, blued type I flat bolt, early two-position flip rear sight marked "S" on the left side (hard to see), early all milled trigger housing with a push button safety, low wood stock, two-rivet handguard stamped with an "M" on the underside. The magazine is blued and marked "O SG" on the spine. Certainly a very interesting early carbine. Provenance: The George Moller Collection

Fine, incomplete with absent buttstock section, retains 60% original parkerized finish with some scattered patches of light to moderate corrosion mostly concentrated on the flip-up blade, and some patches of mild pitting at the muzzle. Stock is good with some scratches and dents, and the recoiling cheek piece is cracked/re-glued in various places. Mechanically fine, although the recoiling cheek piece is fragile and the buttstock is absent as noted above. 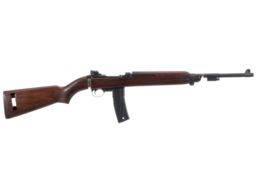 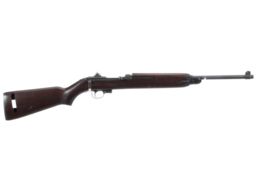 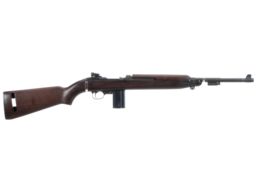 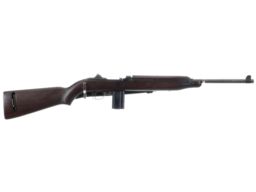 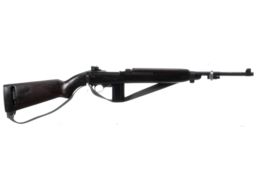 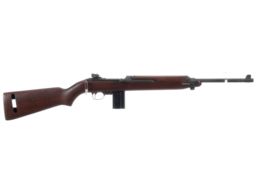