A total of 15,037 of these pistols were manufactured by Colt with the desirable U.S. Navy slide marking, all of which were delivered prior to April of 1915. After that, all Model 1911 pistols delivered to the navy would bear the standard U.S. Army nomenclature, of which there were approximately 578,473 manufactured, making this variation comparatively very scarce. This is an example of a 1912 production, U.S. Navy contract, Colt Model 1911 pistol that was shipped on 7 March 1912 to the Brooklyn Navy Yard ("The Government Models: The Development of the Colt Model of 1911" by Goddard). This pistol was then subsequently issued to the battleship U.S.S. Delaware on 9 October 1912. Serial number 737, just two numbers away from this pistol, is listed on p. 524 of "U.S. Military Automatic Pistols 1894-1920" by Meadows as having been issued to the battleship, and this example is stamped "DEL" on the right of the frame just above the trigger guard. The keel of the Delaware was laid on 11 November 1907 and on 6 January 1909 when she was launched, the Delaware was the most powerful battleship in the world. She was commissioned in the U.S. Navy on 4 April 1910 and by November of that year had joined the First Division of the Atlantic Fleet. With the entrance of the U.S. into World War I on 6 April 1917, the Delaware sailed with Battleship Division 9 to reinforce the British Grand Fleet in the North Sea. During a convoy escort mission the Delaware managed to evade multiple torpedoes fired by a German U-boat. The pistol itself is finished in the military brushed blue finish that was adopted in April of 1912. The left side of the slide is marked with the standard two-line, two-block Colt address and patent dates with the circled Rampant Colt behind the serrations, while the right bears the desirable "MODEL OF 1911 U.S. NAVY" marking. The brushed blue later production replacement barrel is marked with "S" and "P" on the left of the lug. The left side of the frame has the U.S. property marking and "WGP" circled monogram above the magazine release, while the serial number and the previously mentioned "DEL" is on the right. It is fitted with blade front and rounded top notch rear sights, later production replacement checkered slide catch, thumb safety, magazine catch, and wide hammer, long smooth trigger, smooth flat mainspring housing with lanyard loop, a pair of diamond pattern checkered walnut grips, and an unmarked later production replacement two-tone magazine with lanyard loop base. Provenance: The Gus Cargile Collection

Very good, retains 30% plus of the original blue finish with the balance a smooth grey patina, most prominently on the grip straps and top/middle sides of the slide, a few scattered patches of light pitting, and some minor takedown marks. There is a stress crack on the left side of the slide just ahead of the patent date, with period braized repair on the interior. The moderately worn grips are also fine with some scattered minor handling marks and otherwise mostly well-defined checkering. Mechanically excellent. 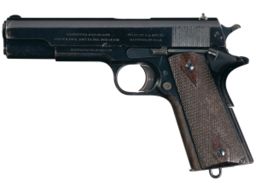 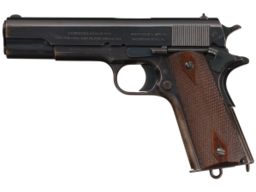 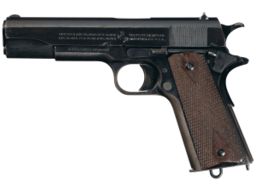 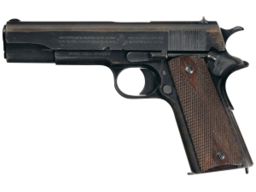 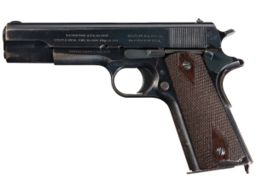 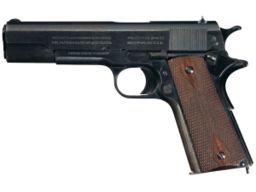