Manufactured in 1917, this pistol was part of a 400 gun shipment on 11 October 1917 to the United States Marine Corps (p. 384 "Colt .45 Service Pistols" Models of 1911 and 1911A1" by Clawson). During the course of World War I, Colt shipped a total of approximately 9,950 Model 1911 pistols to the Marine Corps and at least 25 Government Models, making these pistols incredibly scarce in comparison to their Army shipped counterparts. Unlike the Navy contract Model 1911 pistols, which have a special slide marking, those that were shipped to the Marine Corps had the standard Army nomenclature, as is present on this example. The left side of the slide is marked with the two-line, two-block address and patent markings with the Rampant Colt behind the serrations and "MODEL OF 1911. U.S. ARMY" on the right. The frame is marked with the serial number on the right and the property marking and circled "GHS" inspection mark on the left. The later production replacement barrel is marked with "P" and "HS" on the lug. Fitted with blade and notch sights, checkered slide stop, thumb safety, and wide hammer, short grip safety, smooth flat mainspring housing with lanyard loop, a pair of diamond pattern checkered grips, and a correct, unmarked, two-tone magazine with lanyard loop base. Includes a U.S.M.C. marked swivel holster. Provenance: The Gus Cargile Collection

Very good, retains most of the dull period refinished blue over light pitting with the balance having thinned to a smooth brown or grey patina, most noticeably on high spots and the grip straps. The grips are good with some scattered minor dings and chips and otherwise crisp checkering. Mechanically excellent. The holster is fair. 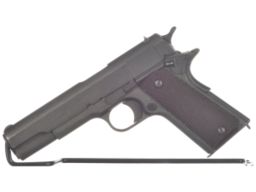 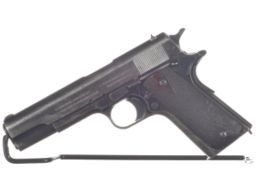 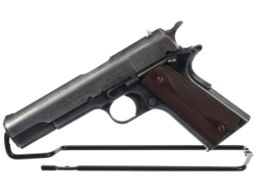 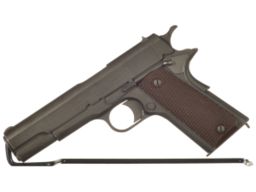 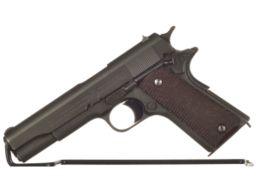 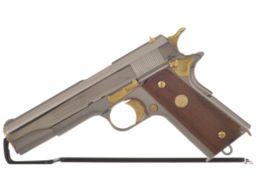