A rarely seen artifact from World War One, this is a fine combination of a 1916 production Model 1903 Springfield Rifle and a Cameron-Yaggi Device. As one of the signature American weapons of the 20th century, the 1903 Springfield needs no introduction. Developed as a joint venture between J.L. Cameron and L.E. Yaggi (which has been misspelled Yazzy and Yazzi over the years), the device was designed to let an infantryman engage targets from a trench without exposing themselves to enemy fire or shell fragments. Mainly made from blackened steel and brass, a 1903 rifle is mounted via brackets and straps at the butt and wrist, with a periscope (not included) for sighting, a hinged linkage to connect the rifle trigger to trigger on the frame and a swiveling pantograph arm to work the bolt. This allows the shooter to support and fire the rifle nearly two feet higher than normal, allowing them to keep their entire body behind hard cover and still observe and engage anyone trying to cross No Man's Land. On pages 217 and 218 of "The Springfield 1903 Rifle" by Lieutenant Colonel William S. Brophy, there are photographs of other devices and the periscope that this example does not have. The rifle is fitted with a "SA/1-16" marked barrel and a "JFC" marked stock, as well as a brown leather sling. Part of the bolt arm of the trench device is marked "SP 108." With a set of hardwood grip panels. Provenance: The George Moller Collection

The rifle is in very fine condition, showing 70% original blue finish, with areas of brown patina, bright edge wear and mild handling marks. A thin crack is present on top of the wrist just behind the receiver, with the balance of the stock fine with scattered light scuffs and dents. The trench device is extremely fine overall and shows some mild wear and handling marks overall, with some scuffing and cracking of the leather strap at the buttstock. The bolt arm binds up a bit on the return; otherwise, the set is mechanically very good. 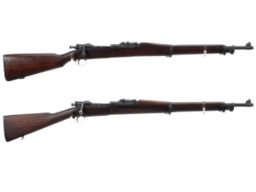 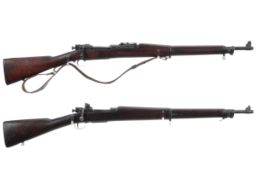 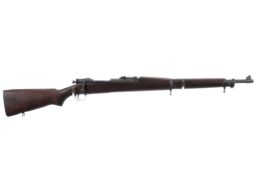 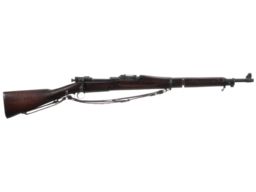 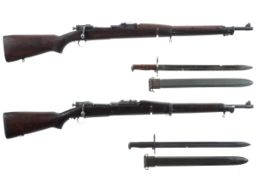 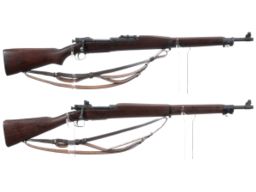