This is an extremely rare example of the original Pedersen "T2" series toggle lock mechanism test rifle that was developed in the 1930s as a test rifle model for the British Government. The original T1 series rifles was developed by John D. Pedersen in the early 1920s, and it eventually competed against the M1 Garand in the late 1920s and early 1930s; however, the M1 Garand (T3 series rifle) was chosen instead of the Pedersen design. This example like the US Military test model featured a retarded blow-back, toggle-jointed mechanism similar in functioning to the Luger pistol firing the same new .276 Pedersen cartridge. John D. Pedersen was an firearms designer, engineer and innovator in his own right, having developed the WWI era 1918 Mark-I Pedersen Device which was designed to convert an M1903 rifle into a semi-automatic rifle, a concept way ahead of its time. His overall theory was that a semi-automatic battle rifle was the way of the future and that they should be easier and lighter to handle, shooting a lighter weight cartridge that developing less heat and recoil. It was this same concept that lead him to design the famous Pedersen Device noted above. Using that theory, he had developed the radically designed .276 Pedersen cartridge firing a much lighter cartridge and bullet than the 30-06. This cartridge was tested along with his toggle-jointed mechanism shown here against the M1 Garand rifle in the 1930s. He is also credited with developing the "en-bloc" cartridge clip design, with the only flaw being his clip was unidirectional (ie it had to be inserted in one direction only) while the John Garand designed clip was reversible allowed it to be inserted from either direction. This model, as noted, is the rifle version of the original Pedersen model only designated the "T2" series for the British trials. The left side of the receiver is marked "U.S. SEMI-AUTO RIFLE T2/CAL .276-PEDERSEN PATENTS". The right side is stamped with only serial number "2". The top chamber is marked "SA," indicating Springfield Armory. It is fitted with a 24 inch barrel with the unique spiral cooling fins on the rear area of the barrel, all milled components, and the perforated sheet metal handguard. It is fitted with a full length walnut stock with finger grooves on the side, and cooling holes on the under of the forearm, and a heavy cupped brass buttplate. This model also used the fixed extended box magazine chambered for the noted .276 Pedersen cartridge. It has the fully adjustable rear sight and the fixed high front sight. This is an unbelievably rare test model of the original Pedersen rifle. This super rare test rifle is complete with a WWI era leather sling, one unidirectional en-block clip containing 10 rounds of original .276 ammunition and a full box (20rds) of the original .276 Pedersen cartridges. Provenance: The George Moller Collection

Exceptionally fine with 80% plus of the original blue/black finish overall, wear and finish loss on the trigger guard area, and thinning on the edges and high spots. The top of the breech block (toggling mechanism) is still in the white from the factory. The stock is in fine condition with original medium red finish overall showing only minor handling marks on the sides with the right side having numerous small bullet tip indents where they used the side of the stock to seat the cartridges deeply into the en-bloc clip. Mechanically excellent. 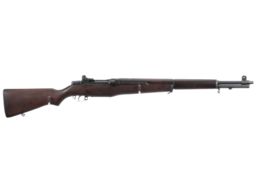 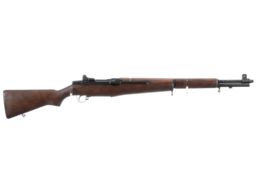 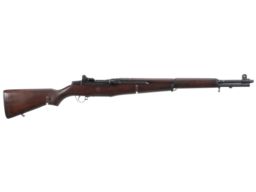 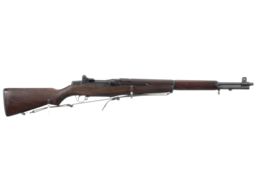 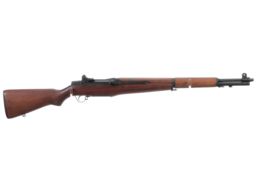 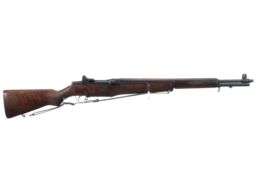