The included factory letter lists this revolver as having a 6 inch barrel chambered in .357 Magnum with blue finish and type of stocks not listed when shipped to Lt. Col. Thomas W. DeMint (1910-1997) in Falls Church Virginia on January 24, 1956. Further included biographical documentation and numerous photos and newspaper articles over the course of his career shows DeMint served among other assignments as a public relations officer for Sixth Service Command where he was awarded the Legion of Merit following World War II for "exceptionally meritorious service in gaining civilian understanding and acceptance of War Department objectives, securing thereby popular co-operation in manning vital manufacturing facilities." He also served as Instructor of Military Science and Tactics and Liaison Chief at the Anniston Army Depot. The letter goes on to state this revolver was purchased by DeMint for his son, Thomas DeMint Jr. as a gift for his high school graduation in May 1956 and was presented to him engraved and nickel plated. Thomas DeMint Jr., would go on to work for the J. Walter Thompson Agency, the largest advertising agency in the world at the time, for 33 years. According to an included letter, he kept this revolver and shot it throughout his adult life until selling it in 2018. Engraved with profuse floral scroll engraving with a punch dot background which covers 95% of the revolver including the front sight. The right side features a cowboy about to throw a lasso on horseback at a steer which is rendered just below the cylinder. A bison portrait is also engraved where the barrel fits into the frame on the right side. A blank inscription plate is engraved on the trigger guard. The engraved panel scenes of the cowboy and bison are identically executed on a Smith & Wesson K-38 pictured on page 38 of "Gun Engraving Review" by E.C. "Jack" Prudhomme (1961), and attributed to an unknown German engraver. Many American military personal, especially officers, are known to have had guns engraved in Germany. It is possible that Lt. Col. DeMint did so with this Colt. Fitted with original full-checkered walnut target grips with silver Colt medallions. 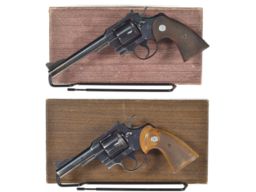 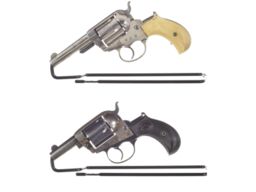 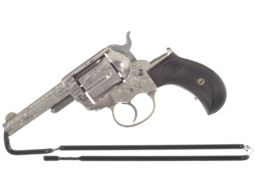 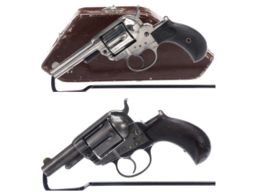 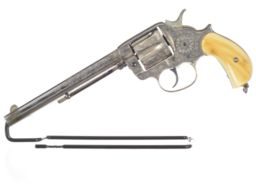 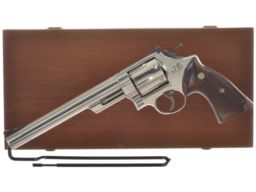