The factory letter lists this revolver in .38-40 with a 4 3/4 inch barrel, nickel finish, pearl grips "with carved steer head motif," and factory engraving and as sold to "E. Cosgrove" of Silver City, New Mexico Territory, and shipped to Simmons Hardware Company in St. Louis, Missouri, on November 24, 1906. The August 11, 1972, dated affidavit from Texas Ranger Jack Dean indicates that he used this revolver while performing his "official duties as a Texas Ranger" and identifies the revolver by serial number and configuration. The revolver has classic factory scroll, floral, and wavy line engraving from Master Engraver Cuno A. Helfricht, the head of Colt's engraving shop from 1871 to 1921. The engraving is predominantly flowing scroll patterns with punched backgrounds, but there are also prominent floral designs on the recoil shield, loading gate, and back strap. The right grip is carved with a raised relief steer head. It also features a blade front sight, the two-line barrel address, "38 W.C.F." in a banner on the left at the breech, the patent marking in a panel followed by the encircled Rampant Colt trademark on the left side of the frame, the triangular "VP" proof and "T" on the left side of the trigger guard, assembly number "5936" on the loading gate, matching partial serial numbers on the barrel and cylinder, and matching full serial numbers on the frame, trigger guard, and butt. In addition, a period "BUCK" (looks like "Buch") inscription is on the backstrap. Information on western lawman Buck Galbraith is included. He is identified as a jailer, constable, deputy sheriff, and marshal in the town of Deming just south of Silver City in the late 19th century and early 20th century before resigning in 1907. Eugene R. Cosgrove (1849-1910) of Missouri was a pioneer in the New Mexico Territory and worked the Sante Fe Trail after the Civil War. He operated the E. Cosgrove Hardware Store in Silver City in the 1890s and early 20th century and also had a feed operation. Jack O'Day Dean (b. 1937) is recorded in the Texas Rangers Hall of Fame and information on his career is included along with other items such as a signed picture of Dean and a Texas Ranger patch. He began his career as a lawman in 1960 and became a highway patrolman for the Texas Department of Public Safety. He became a Texas Ranger in 1964 and later became the captain of Company D and worked as a ranger for 23 years before becoming one of only six Texas Rangers to be appointed as a United States Marshal and then served as a marshal for ten years. Dean's son Kyle also became a Texas Ranger. Some of Jack Dean's biggest cases as a Ranger involved the hitman Charles Harrelson, father of the actor Woody Harrelson, including the highly publicized murder case of Judge John H. Wood Jr., the first federal judge murdered in over a century. During a standoff prior to his arrest, Harrelson while high on cocaine claimed to have killed both Judge Wood and John F. Kennedy leading to claims he was involved in a conspiracy related to the JFK assassination and one of the "three tramps." Dean was also involved in murder investigations related to confessed serial killer Henry Lee Lucas.

Very fine with 70% original nickel plating remaining, smooth gray patina on the flaked areas, distinct engraving, and mild holster wear. The grips are fine and have attractive natural tones and patterns, some mild wear on the steer head which is missing the eye inlays, and small flakes at the edges. Mechanically excellent. This is a very attractive factory engraved Colt Single Action Army connected to the New Mexico Territory in the early 20th century and later to Texas Ranger and U.S. Marshall Jack Dean. 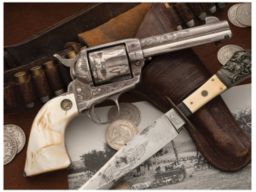 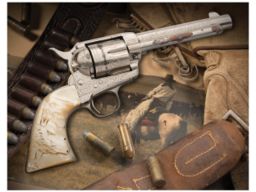 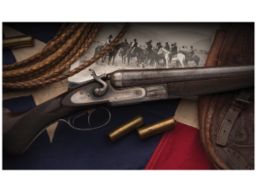 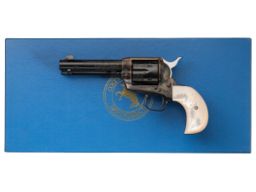 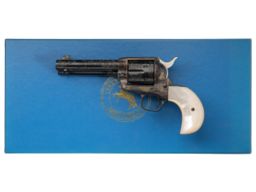 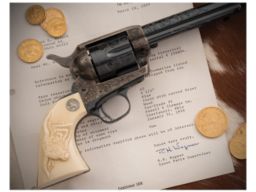