Finely engraved and bearing post-1940 "eagle/N" proofs, this is one of a series of Walther pistols bearing the "TO" monogram logo of the 90th Infantry Division, alias the Tough 'Ombres. One of the heavy hitters of Patton's 3rd Army, the 90th was one of the units to enter Zella-Mehlis as the Western Allies moved into Germany, home of the Walther factory. While eventually destined to be handed over to the Soviets per political agreements on where the borders of the occupied territories would land, for a time the Walther plant was a grand feather in the American cap, to be gone over with a fine toothed comb, both officially (the Americans and Brits coordinated tightly on projects like the "T-Force" program to learn anything they could from Nazi industry, and prevent anything especially choice from landing in Soviet hands) and unofficially (no GI was looking to go through all the hassle of a World War and go home empty handed). Narratives of the occupiers of Zella-Mehlis vary; some were turned away flat out, others were allowed to pick out a souvenir under supervision, and some were able to go deep into the factory. Men of the 90th were in the latter category, and according to legend they were able to locate both the room where Walther's craftsmen did their engraving and the craftsmen themselves, and were able to get a number of half-finished presentation grade pistols fitted out to their specifications. While these pistols are most famously associated with high brass (the most famous pair having been given as a gift to George Patton himself), a number of officers and men of the 90th were able to secure "TO" PPs for themselves, typically higher ranking staff/command personnel and those attached directly to them. While there was a known run of reproduction PPs made in emulation of the Patton TO PPs, it is also known that these repros were made using post-WWII Walthers (such as those made by Manurhin), with all of the appropriate proofs and maker's marks; this example is not one of those. Along with the proof marks on the slide, chamber hood and muzzle, the external markings are of the style of a late war military contract PP, with external serial number and "ac" on the left side of the slide. Much of the surface is covered in deep cut oak leaf motifs with checkerboard accents, zig-zag and dot borders, and geometric accents on the trigger guard. Often left blank on "ac" PPs, the left side of the slide has received a hand cut "Walther" banner. The upper left side of the slide bears the raised name "THOMAS M. ANDREWS." flanked by the 90th ID's "TO" monograms. A 1934 graduate of the University of Chicago and a family man prior to being called to service in 1942, Andrews trained as a field artillery officer and joined the 90th as a motor officer with the Service Battery of the 345th Field Artillery Battalion. By 1945, he had worked his way up to being Chief of Staff for the 90th under Major General Herbert Earnest. In July of 1945 he was released back to the States on points, and after a few years working on Catalina Island for the Wrigley Family, settled down in Illinois as a hardware store owner. As a high ranking staff officer with the 90th, Andrews would have been ideally placed to receive one of these scarce pistols. The grips are black checkered plastic with Walther banners, and the magazine has a phosphate finished body and a bright floorplate finished and engraved to match the rest of the pistol. Also included is a black leather Albrecht Kind flap holster. Another 90th ID engraved Walther PP pistol is also offered in this sale, inviting examination of the contrasts and similarities between the two pistols. There are only three known examples in total of these types of engraved Walther PP presentation pistols with the late blank slide as seen on this example. Of very important note, this presentation Walther PP pistol, bearing serial number 381790P, is only one number away from General George S. Patton’s nearly identical personal presentation Walther PP with a late slide (currently on display at The General George Patton Museum in Fort Knox, can be found pictured online at https://generalpatton.org/exhibits), serial number 381791P, bearing his name with the “TO” monograms. The third known presentation example made using a late blank slide gun was for Colonel John C. Whitcomb, bearing serial number 378447P. With this example, made for Thomas M. Andrews, only one serial number away from General George S. Patton’s gun, it is in a league of its own in terms of rarity and desirability.

Fine, with 95% of the period replated chrome finish, showing a dark tone to the safety cutout and the area around the magazine catch, mild handling marks, and some edge wear. Some detail has been lost in the proofmarks. The grips are very good, with a split down the front of the left panel and some minor dings and scuffs. Mechanically excellent. Produced in very limited numbers under unusual conditions, the "Tough 'Ombre" PPs are some of the most interesting war trophies to come home in the belts and duffel bags of America's GIs, unique souvenirs from one of the hardest fighting units under Patton. 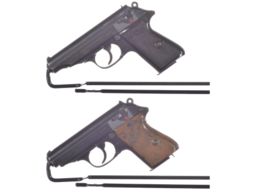 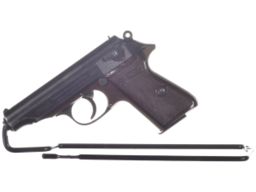 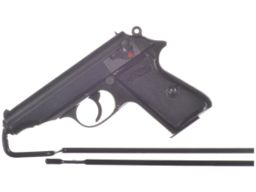 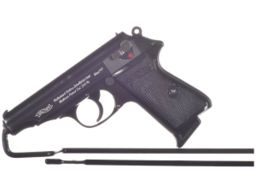 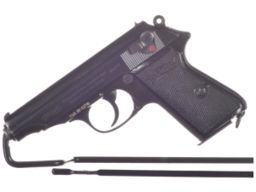 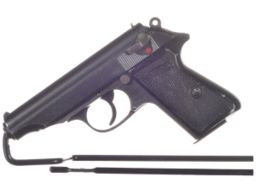