Offered here is an exceptional original Winchester Model 1894 Lever Action rifle with several special order features and a highly desirable telescopic sight built by expert gun smith Axel W. Peterson (1868-1946) of Denver, Colorado. The accompanying factory letter confirms the half octagon barrel in .30 caliber, plain trigger, half magazine and shotgun butt as well as confirming the rifle was received in the warehouse on June 4, 1901 and shipped the next day. The half magazine, half octagon barrel and shotgun butt are all desirable special order features found on this Model 1894. The elevation adjustable telescopic sight by Axel Peterson measures 18 ¾ inches long, is marked "MADE BY/A.W. PETERSON/DENVER, COLO" and has cork lens covers. The rifle is also fitted with a combination Beach front sight, three-leaf rear sight, and folding tang peep sight. The hammer and lever are casehardened, the loading gate is nitre blue, and the remaining surfaces are blued. The plain forearm and straight grip stock are nicely figured walnut. The stock is fitted with a smooth shotgun type steel buttplate. Includes a period canvas bound full length case. The interior of the case features a compartment crafted from a cigar box containing extra cork lens covers and lengths of cord likely used as part of a bore cleaner kit. Axel W. Peterson opened his now legendary gun shop in 1886 in Denver, Colorado, nearly 10 years after emigrating to the U.S. from his native country of Sweden. Peterson was a highly talented gunsmith who built custom rifles and nearly everything else from the tools of this trade such as milling machines, screwdrivers and pliers, to gun accessories such as telescopic sights like the one on this rifle. His reputation as a great barrel maker started in 1904 when he partnered with George Schoyen. Their partnership lasted from 1904 until Schoyen's death in 1916. While many of the barrels carried the Schoyen name, most of the barrels were made by Peterson. By his own account he made between 600 to 700 barrels throughout his career. Around the time of World War I, Peterson spent a year with the Brownings in Utah to assist in the development of their 1917 machine gun. He is credited as the inventor of the bottom ejection principal in pump action guns. Before Remington released its version of a bottom ejecting shotgun, they asked Peterson for his permission. Peterson allowed Remington use of his design and never accepted a cent. Outside the shop he was a top competitive rifleman who set records with ease. At the annual tournament of the Colorado Rifle Association in late 1905 it was reported that Peterson's "scores were the highest ever made in the west and probable highest in the United States." He went on hunting trips with fellow Denver gunsmiths Carlos Gove and J.P. Lower, mountain man Charlie Stobie, famed Wild West showman Buffalo Bill and President Theodore Roosevelt. On his final hunt at the age of 83 he had no difficulty getting a deer. Peterson died in 1946, found dead at his shop by his son and the heir to the family business, Roy. For four years Roy ran the shop and then sold it to Leighton Baker, a gunsmith instructor employed by Roy. In 1953, Baker closed the shop in Denver and moved it to Mount Dora, Florida, in the 1950s. Baker also had a successful career in politics, as he was the first Republican in central Florida to be elected to the state House in nearly a century. Baker continued to run the business until 1980 when he sold it to his three sons. The A.W. Peterson Gun Shop remains open to this day. “Peterson’s is a place where hunters story swap, where gun buffs come to talk shop and where history lovers come to hear tales of yesteryear,” wrote one observer. Includes consignor research related to the life of Axel Peterson and his shop.

Exceptionally fine, retaining 85% plus original blue finish with some flaking turned to brown on the receiver and high edge wear on the buttplate. 90% original nitre blue remains on the loading gate. 95% plus original case colors remain on the hammer and lever. The A.W. Peterson telescopic sight has 85% of an attractive brown finish and has hazy optics. The wood is excellent with some minor dings and scratches. Mechanically excellent. The case is fine with some staining to the exterior and typical high spot wear on the lining. This Winchester Model 1894 Rifle with A.W. Peterson telescopic sight will make a fine addition to any Winchester or sporting collection. Do not miss your chance to acquire a great piece of Colorado sporting history from a bygone era. 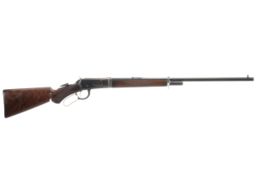 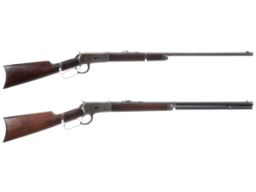 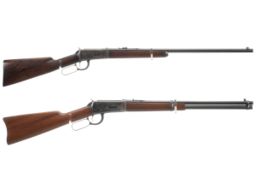 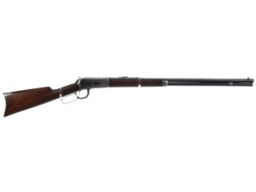 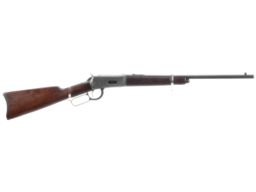 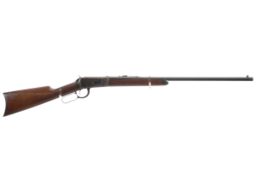