This Henry rifle was manufactured by the New Haven Arms Company in February 1864. This rifle has the mid-production Henry features that include: (1) second style brass receiver that lacks the alternate rear sight dovetail, (2) brass buttplate with rounded heel, (3) large, second style, New Haven Arms legend with all serif letters, (4) nickel-silver front sight with tapered profile, (5) third pattern rear sight with elevator with rounded ends and "900" marking at the top of the leaf, (6) large diameter brass magazine follower and beveled receiver follower cut-out, (7) straight bottom walnut stock with final style comb angle and (8) factory sling swivel on the left side of the stock and screw-fastened sling hook loop on the left side of the barrel. The top barrel flat is roll stamped with the two-line legend: "HENRY'S PATENT OCT. 16. 1860/MANUFACT'D BY THE NEWHAVEN ARMS CO. NEWHAVEN. CT. ahead of the rear sight. The serial number is stamped: (1) on the top barrel flat behind the rear sight, (2) on the left side of the lower receiver tang, (3) in the upper tang inlet of the stock, (4) on the inside of the buttplate and (5) on the shanks of the hand fitted buttplate screws. All of the visible serial numbers match. The tang screws are, correctly, not stamped with the rifle serial number. The barrel and integral 15-shot magazine are blued, the brass receiver, cartridge elevator and buttplate have a natural brass finish, the rear sight, bolt, tang and buttplate screws show traces of niter blue in protected areas and the hammer, trigger and lever are color casehardened. The straight grain walnut stock is oil finished. Although the Federal government purchased just over 1,700 Henry rifles during the Civil War and only one regiment, the 1st District of Columbia Cavalry, was fully armed with Henry rifles, experts believe that the majority of the approximately 9,000 Henry rifles manufactured between April 1862 and April 1865 saw service during the Civil War as privately purchased weapons. Federal soldiers, particularly in 'Western' regiments from Illinois, Indiana, Michigan and Kentucky appreciated the firepower offered by the Henry lever action and were willing to spend their pay for the most advanced rifle available during the war. Several Western regiments were armed primarily with privately purchased henry rifles by the end of the Civil War.

Very good. The blue on the barrel and integral magazine has faded to a mottled plum brown patina with some silvering on contact areas of the magazine. The barrel edges are sharp and the surfaces of the barrel/magazine are smooth. The New Haven Arms legend and serial number on the top barrel flat are sharp. The receiver is fine with a few scattered handling marks and some minor edge wear at the sideplate joints. The brass receiver and buttplate have a very attractive, untouched, patina. The hammer retains strong traces of the dove-gray case colors. The trigger and lever have a smooth, plum brown patina. The tang and buttplate screws are indexed and have traces of fire blue finish on the shanks. The re-oiled stock remains very good condition with scattered light handling marks. Most of the oil finish remains intact. This is a good looking, original, example of a early 1864 production Henry rifle that probably saw action in the Civil War. 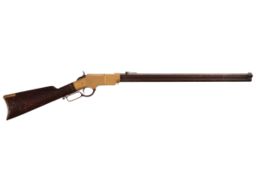 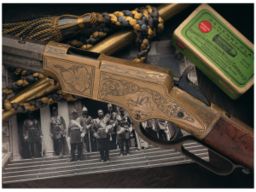 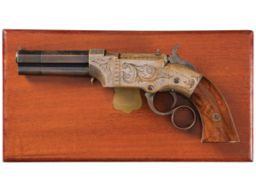 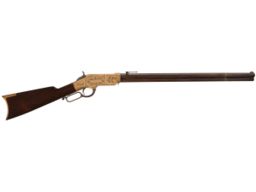 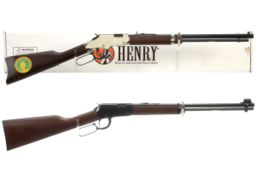 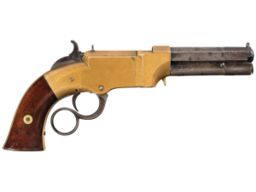