Highly prized by collectors for its limited production and significance as the first Colt revolver manufactured specifically for a metallic cartridge, the Model 1871-72 Open Top Revolver is the transition model between the Colt cartridge conversions and solid frame Single Action Army revolver. The production of the Open Top was made possible after the American government refused Rollin White’s request to extend his breech loading revolver patent in 1870. White’s patent was a drastic leap in the progression of firearms development as it allowed for a bored through revolver cylinder to be loaded with cartridges at the rear. Smith & Wesson held exclusive rights to the use of White’s patent, and for every S&W manufactured revolver that used his bored through cylinder patent, White received a 25 cent royalty. White was responsible for defending his patent in court against other manufacturers who infringed upon his breech loading design, and his success in the courts paved the way for S&W to manufacture the first commercially successful revolver to use rimfire cartridges, the Model 1, with near impunity from competitors. S&W followed up the Model 1 with a series of tip-up revolvers that dominated the rimfire market. The expiration of White’s patent signaled the end to S&W’s unyielding domination over the rimfire revolver market. Colt’s response was the Model 1871-72 revolver of which 7,000 were manufactured between 1872-1873 at a time when settlers pouring into the American West demanded powerful large caliber sidearms. Their heavy use on the Western frontier and limited production run has made the Model 1871-72 one of the most difficult Colt revolvers to find in any condition. The included factory letter confirms the 7 1/2 inch barrel in .44 rimfire, blue finish with iron back strap, and wood stocks as well as being part of a 50 gun shipment on August 28, 1873 to J.P. Moores Sons, New York City. "-ADDRESS COL. SAMl COLT NEW-YORK U.S. AMERICA-" marked on top of the barrel. The left side of the frame is marked with the "COLT'S/PATENT" marking and the cylinder is roll engraved with the Texas naval scene and "COLTS PATENT No. 601". The matching serial number "1601" is marked on the barrel, frame, trigger guard and back strap. The loading gate is numbered "680". Blade front sight and notch rear sight on the breech end of the barrel. Fitted with a one-piece varnished walnut grip. The name "*C.R. NAGLE*" is stamped on the right of the breech end of the barrel. Although not a positive identification, a few 1882 dated newspaper articles have been located referring to a C .R. Nagle, traveling auditor of the East Tennessee, Virginia, and Georgia Railroad, as well as an 1887 dated newspaper article that mentions him becoming the new master of trains for the East Tennessee Railroad.

Very good plus, retaining 30% original blue finish mostly in protected areas with smooth gray patina and mottled light brown patina on the balance, an equal amount of original case colors at the edges and in protected areas, and mostly clear markings in the metal overall with light fading on the end of the barrel address. Grip is fine with most of the original varnish, scattered scratches and dings, a chip on the bottom left, and some crazing at the bottom edges. Mechanically fine. One will look a long time to find a more solid representative example of a Colt Open Top .44 revolver! 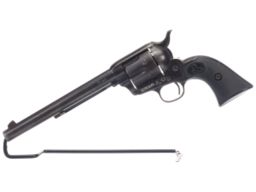 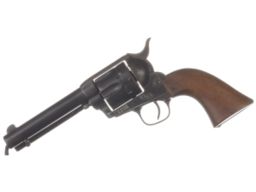 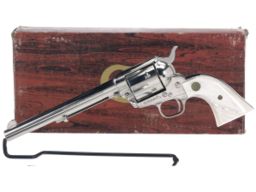 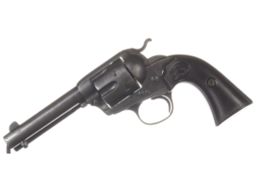 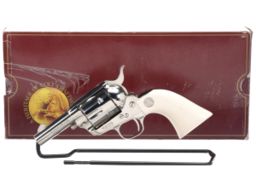 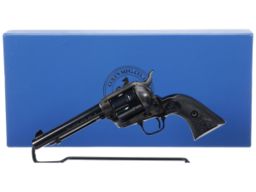