This Short Express Rifle Model 1876 is configured similarly to the Model 1886 Lightweight in that it has a short 22 inch barrel (although not tapered), rifle style forearm, short magazine tube, and shotgun butt. A similar example is pictured on page 238 of "The Winchester Book" by Madis. In the data discussed on page 253 of the above book, Madis notes that only one of each 800 had a shorter than average barrel. The accompanying factory letter confirms the 22 inch round barrel in highly desirable .50 Express caliber, plain trigger, 1/2 magazine and shotgun butt. The letter also states the rifle was received in the warehouse on October 20, 1880 and shipped on November 9, 1880 with 5 other arms to order number 22432. This rifle is a second model with a dust cover guide rail attached to the receiver with two screws. The rifle is fitted with a dovetail blade front sight and an "1876" marked folding ladder rear sight. The top of the barrel is stamped with the two-line address/patents legend ahead of the rear sight and ".50 CAL" at the breech. The dust cover is marked "WINCHESTER EXPRESS/.50 CAL 95 GRS." The cartridge elevator has the factory "50-95" caliber marking and is faintly hand marked "Johny Fay" by a previous owner. The upper tang is marked "MODEL 1876." The lower tang has the serial number. This Model 1876 lacks British proof marks which are commonly seen on these .50 Express short rifles. The plain forearm and straight grip stock are walnut. Fitted with a smooth steel shotgun type buttplate. Per consignor the rifle "came out of California." The .50-95 Winchester Express was the largest caliber available for the Model 1876 and proved popular with big and dangerous game hunters. Many Model 1876 rifles chambered for this powerful cartridge were shipped to England and then found their way to Africa and India where they were often employed against big cats. Theodore Roosevelt loved his .45-75 '76, but he and other Americans scorned the .50 Express, and thus, the Model 1876 was only produced in limited numbers chambered for that cartridge compared to the smaller calibers.

Very good. 25% of the original blue finish remains, mostly visible in the sheltered areas, otherwise the rifle has a smooth brown patina. Traces of original nitre blue remain on the loading gate. The wood is also very good with an absent sliver at the upper tang and minor dings and scratches. Mechanically excellent. 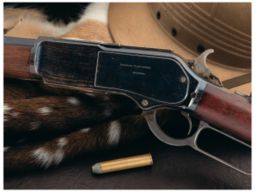 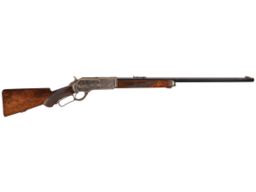 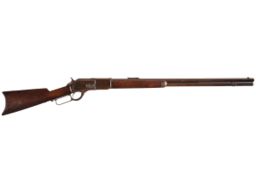 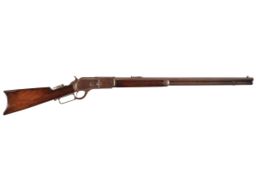 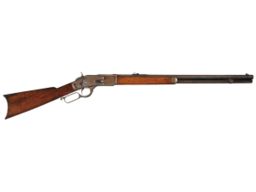