The Winchester Model 62 was intended to be an improvement upon two of the company's most popular designs, the Model 1890 and the Model 1906. Those two rifles were extremely popular, especially as a boy's first rifle, with the total production of the two models reaching over one and a half million. The little .22 rifles were rugged and simple, a perfect gun for a young squirrel or rabbit hunter who may or may not have been steady with maintenance or gentle in care for the them. Winchester hoped, that by basing a new rifle off of two of their tried and true models that were in-turn based off of John Browning's designs, they would again strike gold. The Model 62 was introduced the same year as the Model 61, a slightly more modern looking, hammerless design, but otherwise had similar capabilities. Not only did the 62 have to compete against the futuristic Model 61, but also against its tried and true ancestors, the 1890 and 1906, as well as a plethora of other American-made hammerless competitors from companies such as Remington, Savage, and Marlin. All of these factors led to somewhat disappointing sales for the Model 62, with only around 410,000 being produced by the end of its run in 1958. Like many of these "boy's rifles", many of these 62's were used hard and often poorly cared for, leaving many of those manufactured in poor condition, and probably just as many that didn't survive at all. This example, the very first of production, bears the elusive serial number 1, which is a true rarity no matter what Winchester model, and likely was refinished at the factory due to such treatment. The upper left of the barrel at the breech has the standard model, trademark, and caliber markings, while the upper right has the two-line Winchester address. Interestingly, the barrel lacks the typical Winchester factory oval proof, and may have been replaced when it was refurbished at the factory. The three-line Winchester trademark is marked on the upper tang and the desirable, very first, serial number 1 is marked on the lower tang as well as the bottom forward area of the receiver. It is fitted with a beaded blade front sight and an elevation adjustable notch rear sight. It is mounted with a ten-groove slide handle and straight grip stock with a hard rubber Winchester buttplate. Includes a hardwood, glass topped display case with a plaque regarding the gun.

Very fine, retains 98% plus of the later, factory refinished blue finish with a small patch of light pitting/grey patina on the right of the receiver, some very light pitting visible beneath the finish on the lower tang and receiver ring, and some scattered light handling/cycling marks. The wood is also very fine with some scattered minor dings and scratches concentrated on the lower edge of the buttstock and slide handle, a couple minor chips to the left of the upper tang, and retaining most of the original varnish. Mechanically excellent. The case is fine with some mild handling/storage wear. It is rare to have an opportunity at any Winchester model bearing serial number 1, let alone one with such pedigree and popularity as a youngsters first firearm! 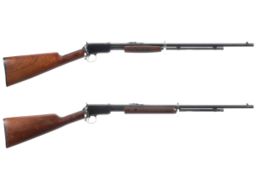 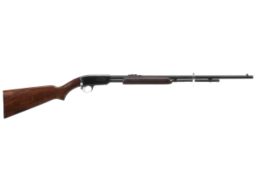 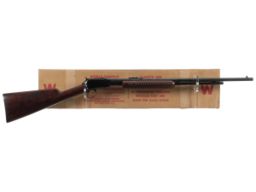 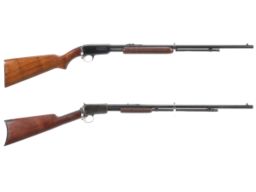 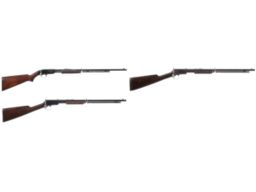 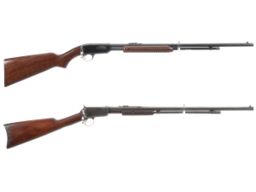