Leonard Reedy (1776-1837) is among the most respected master riflemakers from the "Golden Age" and produced excellently built rifles with beautiful carving and engraving. As a testament to Reedy's artistry, one of his rifles is in the Metropolitan Museum of Art's Gallery 372. Reedy apprenticed under John Bonewitz and followed his master when he moved to Pine Grove, Pennsylvania, in 1809, and Reedy later relocated to Gratz, Pennsylvania. This stunning rifle is very similar to the example shown by the Kentucky Rifle Foundation on their page for Reedy and also has similarities with other Reedy rifles as well as those by Bonewitz and Andrew Figthorn. The carving details are very similar to the Reedy examples in Joe Kindig Jr.'s classic "Thoughts on the Kentucky Rifle in Its Golden Age" on pages 218-224, and the rifle overall is rather similar to the rifle on page 108 of "Kentucky Rifles & Pistols, 1750-1850" by Johnston. It is accompanied by a Kentucky Rifle Association 2006 Best Relief Carved Rifle award. The rifle has a silver blade front sight with a dovetailed brass base, dovetailed notch rear sight, hooked breech, a standing breech with a "dished" rear sight and light engraving, unmarked lock, double set triggers (adjustment screw absent), four barrel keys without escutcheons, silver wrist and cheekpiece inlays (latter pierced and engraved in the shape of a distelfink), brass buttplate five flats and a wedding band on the heel finial, patchbox release on the buttplate behind the patchbox lid, beautifully scroll engraved patchbox with three screws per side plate and finial, two-screw toe plate with rounded finial and light track line border, and full-length curly maple stock with Roman nose profile, incised double line molding terminating in scrolls along the forend, nicely shaped flats, raised relief scroll and checkered patterns at the top of the wrist, incised double line molding along the bottom of the butt, and stunning combination of incised and raised relief carved scroll engraving on the butt.

Fine as a flintlock reconversion. The consignor indicated he did not know precisely when the barrel was relined but noted that the rifle was still being shot in competition in the 20th century. The barrel and lock exhibit an even applied brown finish/patina and some minor oxidation and pitting. The brass and silver have attractive aged patinas, distinct engraving, and mild wear. The stock is also fine and has minor professional restoration work by Louie Parker primarily by the breech/lock, stunning carving, beautiful figure, and generally light scratches and marks. Mechanically fine. 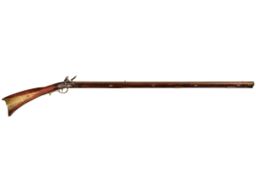 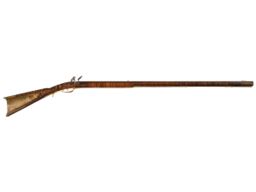 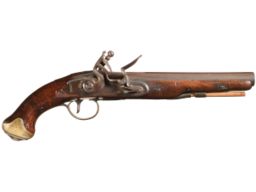 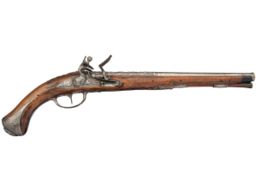 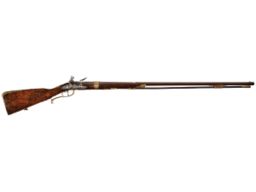 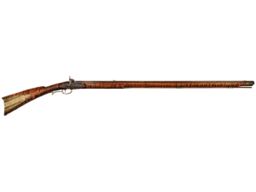