Henry Eckler of Pine Grove, Schuylkill County, Pennsylvania, was identified by Henry Bishop as serving as a private in the 2nd Regt., 1st Brigade during the War of 1812. Henry George Eckler (1791-1862) is believed to have been associated with John Bonewitz. Like many early riflemakers, he was recorded as a farmer in census records. He is buried in St. Peter's Cemetery in Pine Grove. His son, Henry Eckler Jr., died just a couple months before him and is also buried there which has made things a bit confusing for researchers. Relatively few of Eckler's guns survive. This one has a smoothbore barrel with blade and notch sights, entwining wavy line engraving ahead of and behind the rear sight, "H. Eckler." signature with scroll accent, and a "D" stamped on the upper left at the breech. The lock is marked "KETLAND/&Co" and has some light engraving. The gun has a plain single trigger and engraved brass furniture and accents, including a very attractive patch box with scroll and border engraving, triple pierced finial, and four piercings on each side plate. The wedge escutcheons are silver, and there are also sixteen other silver inlays, including a stag on the cheekpiece. The stock has some light incised molding and accents and very attractive flame figure.

Good as reconverted to flintlock configuration with gray and brown patina, moderate oxidation concentrated by the breech and lock, aged patinas on the brass and silver, at least one replaced wedge escutcheon, and moderate overall wear. The stock is very good and has attractive figure, some cracks and repairs in the forend, mild scrapes and dings, and wear by the vent. Mechanically fine. 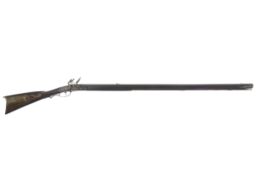 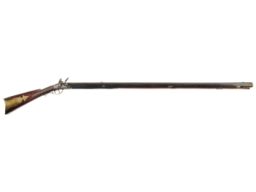 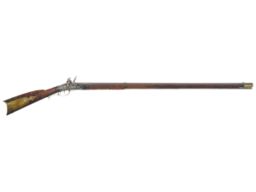 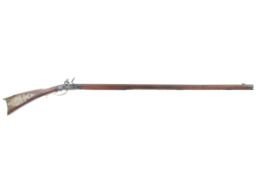 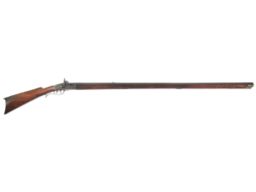 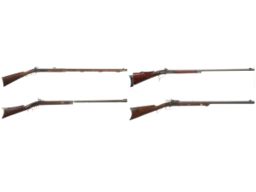