This classic half-stock rifle has a "J&S HAWKEN" marked lock with light floral engraving, a feature only rarely seen on original rifles by brothers Jacob and Samuel Hawken. The Hawken brothers of St. Louis are arguably the most famous of all American muzzleloading rifle makers. They came from a family of gunmakers in Maryland. Jacob moved to Missouri around 1818, and Samuel moved there several years later. They were in partnership from 1825 until Jacob's death in 1849. Relatively few rifles from their years in partnership have survived. They are often associated with the famous mountain men of the Rocky Mountain fur trade in the 1820s to 1840. The standing breech on this rifle is very similar to the one on the rifle on page 48 of "The Hawken Rifle" by Bob Woodfill. The trigger guard, double set triggers, buttplate, and toeplate are also similar to other Hawken rifles, including the early Samuel Hawken rifle from the 1850s on pages 73-76 of Woodfill's book. Note the matching finials on the toeplate and trigger plate. The seven-groove rifling and silver blade front sight with copper base are similar to the Carson rifle on page 89. Like many of the original Hawken rifles, the toe of the buttplate continues slightly past the rear of the toe plate. The wedge escutcheons are pinned. It also has a poured pewter forend cap. The barrel has blade and notch sights (rear sight reversed), three unclear initials signed on top behind the rear sight that are partially lined out instead of the usual "J. & S. HAWKEN/ST.LOUIS" marking, and a slant hook breech (more widely used by Samuel after Jacob's death). The initials on the barrel may have been for one of the rifle's owners in the 19th century and perhaps struck out by a later owner. The standing breech has a long tapered tang that reaches nearly back to the front of the comb. The plain maple stock has a long shallow cheekpiece.

Fine overall with a coat of black paint on the metal and wood and signs of heat exposure but otherwise very solid condition overall. The metal exhibits some minor oxidation/pitting and fairly minor overall wear. The stock has areas rubbed back showing the grain on the grain on the forend and butt, a few dents, minor cracks at the nose and tail of the lock, left flat, and butt; and generally rather minor overall wear. Mechanically fine (full-cock only). This is a very attractive and interesting J. & S. Hawken marked rifle with features from the partnership years and shortly after Jacob Hawken's death while Samuel Hawken continued on in the 1850s. 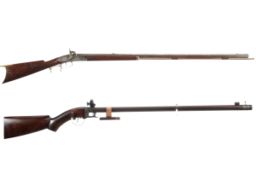 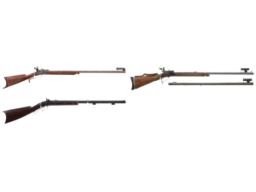 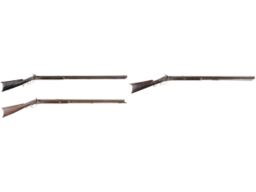 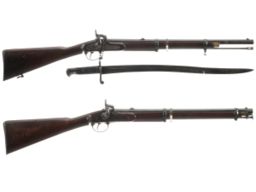 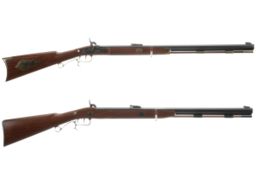 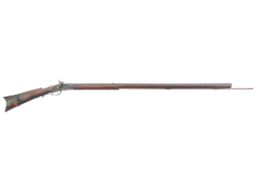