When it comes to firearms of the American West, two come to the top of the list: the Winchester Model 1873 "The Gun that Won the West" and the Colt Single Action Army. The two were literally made for another once Colt introduced the Single Action Army in .44-40 and other cartridges used in Winchester's popular repeaters, and both guns saw extensive use on the frontier in the late 19th century. While commonly associated with American cowboys and settlers, the Winchester Model 1873 also saw extensive Native American use, with multiple examples known to have been used by the Lakota, Apaches, and other native nations during their respective struggles to maintain autonomy and territory. These fast firing carbines offered a serious edge in close in engagements compared to the single shot Springfield trapdoor rifles used by the U.S. Army at the time. Many Native American firearms, including Winchesters documented as owned by Lakota Warrior Kicking Bear, Nez Perce Chief Joseph, Lakota war leader Sitting Bull, and others, were decorated with tacks as a way to personalize their trusted firearms, and this decoration gives these antique firearms a lot of character and sets them apart from other Winchesters in many collections. This Model 1873 has small tacks on both sides of the forend and the buttstock, including cross designs. Cross symbol use predates the arrival of Europeans, but the design on the right side of the stock is distinctly Christian in style. Many Native Americans converted to Christianity, some under force, and many others incorporated the Christian God and/or other elements of Christianity into their own tribal religion. In addition to the decoration, this carbine has the usual "barley corn" style front sight, the usual Winchester markings, a period modified rear sight, Third Model integral dust cover rail, saddle ring on the left, carbine forend with a single barrel band, and a rifle style buttstock with crescent buttplate. Provenance: The Brandhorst Collection

Fair with a lot of frontier used character throughout. The iron displays dark brown patina and extensive pitting, absent dust cover, and signs of heavy use and exposure typical of Native American firearms from the Old West. The brass cartridge elevator and tacks display a deep aged patina. The scorched stock and forearm have chips, cracks, repairs, and heavy wear. All of the tacks are present. Like many of these well-loved "frontier issued" Winchesters, the action remains mechanically fine. This fascinating tack decorated Winchester will be sure to add a lot of character and interest to any western arms collection. 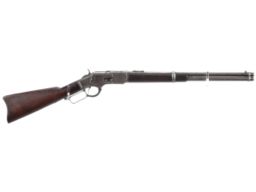 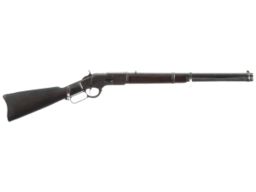 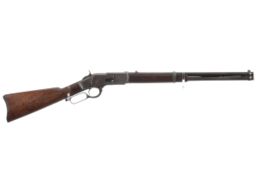 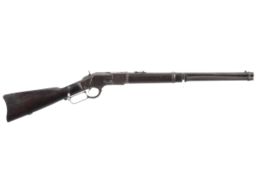 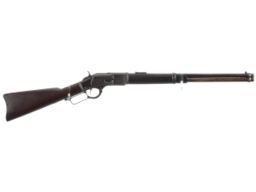 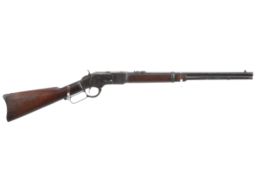