As discussed on page 268-269 of the included copy of "A Life's Tapestry of a Collector: The Gamble Collection" by George F. Gamble and R.L. Wilson which shows and discusses this incredible Colt, "Bisley Models were rarely decorated by Wilbur A. Glahn, since the period of their manufacture was completed c. 1915 before Glahn joined the Colt engraving staff c. 1919." The revolver is also featured in "Colt Engraving" and "The Book of Colt Engraving" by R.L. Wilson on pages 404 and 305 respectively and on page 177 of "The William M. Locke Collection" by Frank Sellers. In "Colt Engraving," the revolver is shown beside SAA 344554, and Wilson indicates the two were embellished as a pair in the late 1930s and are the only known Bisley and Single Action set known from Glahn's time at Colt. Also see "Colt Peacemaker Encyclopedia, Vol. II" by Keith Cochran on page 35. The trigger guard has the "&" mark on the right indicating the factory rework, and "445B" assembly marks were added during the work on the face of the cylinder, left side of the trigger guard and back strap, and on the loading gate arm. The grade "C" engraving is Glahn's distinctive scroll and floral patterns with punched backgrounds and covers over 75% of the visible surfaces and is very similar to the grade "C" engraving example illustrated in "Colt Revolvers and Automatic Pistols De Luxe" from the 1929-1941 Colt catalogs (see page 384 of "Colt Engraving"). Note that in addition to Glahn's iconic scroll and floral patterns, the revolver has engraved bands and stylized panels around the markings, and the engraving also extends onto the ejector rod button. The floral patterns down the back strap are particularly attractive. The revolver was originally manufactured in 1905 and, aside from the incredible engraving, has the standard markings and features. The hard rubber grips have the embossed Rampant Colt trademark. The names "JOHN/GOLLY," "Harry Holmes," "JRG" or "JRS," and "Maurice H. Summers" are also hand scratched inside the right grip, and "Leona" and "Charley/Buffington" are inside the left grip. The names are noted in "A Life's Tapestry of a Collector," but no information on them is given. Our research indicates at least some of these are names from a farming family in Story County, Iowa. John R. Golly (1884-1969) had a sister named Leona E. Golly (1886-1965) that married Charles E. Buffington (1883-1970) in 1905, the year this revolver was manufactured, so perhaps it was a wedding gift from the others. They moved to Mehurin, Minnesota, by 1920. Individuals with the other names have not positively linked to this family, but there were several Harry Holmes in Iowa in the same period, including a farm laborer that might have had ties to their farm, a veteran of WWI, and others, and a Dr. M. H. Summers (d. 1918) listed in Columbus Junction in Eastern Iowa. Provenance: The William M. Locke Collection; The David S. Woloch Collection; The George F. Gamble Collection

Exceptionally fine as factory engraved by Wilbur A. Glahn (see above) with sharp engraving throughout, some softened markings, 98% plus factory blue and casehardened finish remaining with only minimal light handling and storage type marks, faint cylinder drag lines, and the screw from the upper right of the back strap absent (oversight at the factory perhaps). The grips are very fine and have attractive aged "chocolate" tones, distinct trademarks and checkering, and minor wear. Mechanically excellent. This is an absolutely gorgeous Colt Bisley Single Action Army revolver and one of only a very select group engraved by Wilbur A. Glahn during his time at Colt prior to World War II. 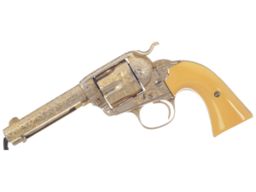 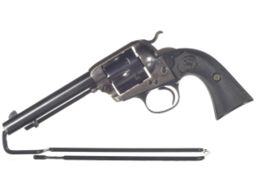 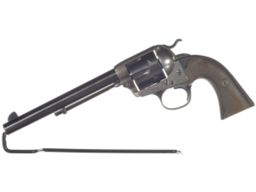 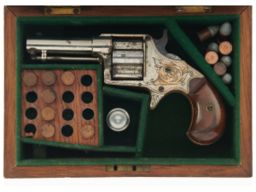 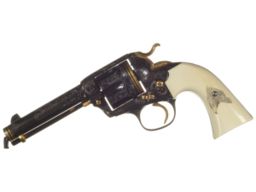 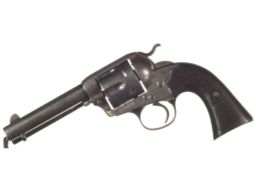