Almost certainly manufactured by one of the legendary Sheffield knife makers around the mid-1800s, this knife shows many desirable features from the period. It measures 15 inches overall with a 10 1/8 inch spear point blade. There are a couple small visible cracks/flaws in the ricasso area that appear to have been repaired/stabilized long ago. Both sides of the ricasso are marked "BB", which the writer believes to be the markings of a local blacksmith/bladesmith who performed a repair in the area of the guard/ricassos. The guard is German silver and features a cast lion's head on each side. The grip scales are smooth pearl and the pommel is German silver and features a cast spread wing patriotic Federal pattern eagle with snake on both sides. Includes a black leather sheath with gilt accents and German silver fittings.

Fine, the blade mostly a bright grey patina with a few scattered patches of light pitting, a few areas of slightly uneven grind (likely from during the time of the repair), and a couple small stabilized hairline cracks visible on the ricasso. The German silver shows an attractively aged patina and the grip scales are very fine with minimal handling evidence. The sheath is also fine with a moderate crease/tear in towards the center, which may be evidence pointing to the need for repair of the knife. 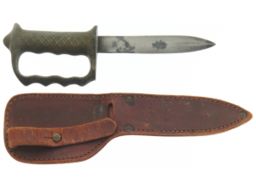 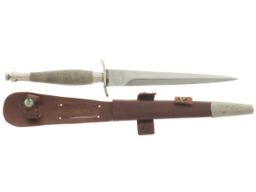 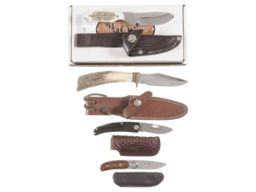 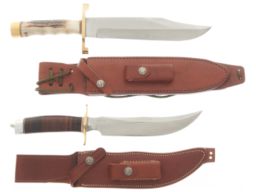 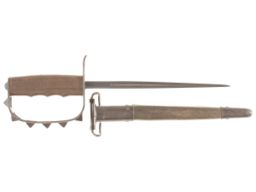 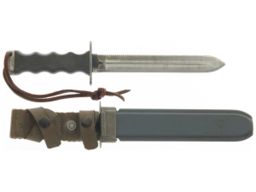