This revolver falls within the range for the series of revolvers inspected by Captain Frank Heath (111656-116931) noted on page 77 of "Colt Cavalry and Artillery Revolvers...a Continuing Study" by Kopec and Fenn where the author's note that the "G" markings are believed to stand for "Government" and that the ninth government contact for Colt Single Action Army revolvers was dated August 11, 1884, and called for 2,000 revolvers. They were manufactured between August 11, 1884, through January 31, 1885. The tenth contract, again for 2,000 revolvers, was signed on June 22, 1885. Many of the revolvers in this range are known to have been issued to the New York Militia. This revolver was manufactured in 1885 and remains in its original "Cavalry Model" configuration. The 7 1/2 inch long barrel has a blade front sight, "COLT'S PT. F. A. MFG Co HARTFORD CT. U.S.A." marked on top, "P" and "D.F.C." stamped on the bottom just ahead of the cylinder pin, and "C/G/J" and the matching partial serial number "4124" under the ejector housing. The ejector has the bulls-eye head. The cylinder has "P," "D.F.C.," and the matching partial serial number "4124" on the sides and "S" and "1" on the rear face. The frame has the three-line patent marking followed by "U.S" on the left, an "S" above the firing pin hole, a "U" on the right side rear under the grip, and "D.F.C." over the full serial number on the bottom. The loading gate has the assembly number "703." The trigger guard and back strap have the full matching serial number and the noted "G" markings. The grip has a faint Frank Heath oval cartouche under an unclear date (presumably 1885) on the left, an outline of a cartouche on the right (David F. Clark's), and "D.F.C." stamped to the right on the butt. No number is legible in the rear mortise of the grip, but all of the serial numbers on the metal components are matching.

Very good with 25% of the period refinished blue (particularly noticeable around the replaced front sight), some small pits and marks under the finish, traces of original case colors, small patches of moderate pitting on the ejector housing as well as the cylinder and frame, mostly smooth gray and brown patina on the balance, and moderate overall wear. The lightly sanded, reoiled grip is also very good and has moderate edge and handling wear, some chipping at the lower edges, dents on the butt, and hand worn cartouches. Mechanically excellent. 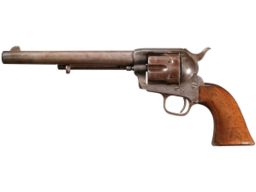 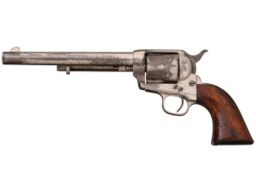 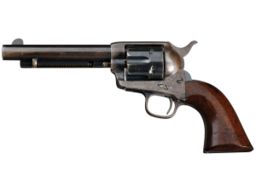 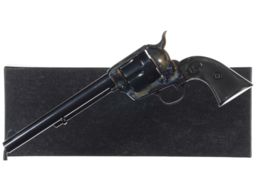 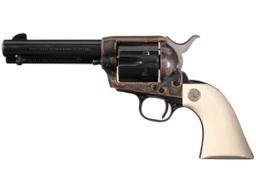 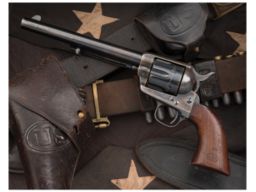