Manufactured in 1919 with fixed sights, the two-line/two-block patent dates and address on the left side of the slide ahead of the Rampant Colt, and the caliber markings on the right ahead of the ejector port. This pistol was subsequently masterfully embellished with 75% coverage floral scroll engraving that is signed "H&H 1998" on the right of the frame with an "H/T" monogram on the front of the trigger guard. Both sides of the slide are fitted with two flourishes of floral scroll carved from the same material as the grips. The grips have been expertly skeletonized and relief carved with "bordello girls" and "COLT" banners at the tops. The trigger guard is marked "1/VP" on the left side and "68" on the right, with a checkered spur hammer, smooth trigger, "CAL. 38/COLT" marked full blue magazine. Some included correspondence with the pistol from a previous owner describes the pistol as having belonged to his grandfather who was a trick shooter in a wild west show and then his father, who was a colonel in the U.S. air force. Also included are eight dummy cartridges finished in the same manner as the pistol including "bullets" of the same material as the grips (most glued into the case) and a fitted "violin" style hardwood case. 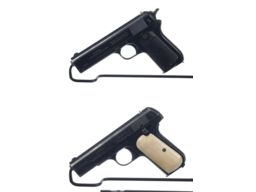 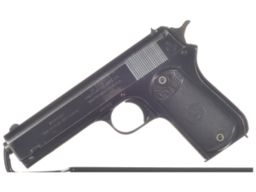 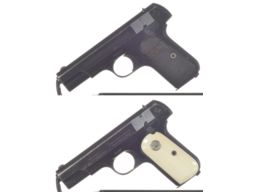 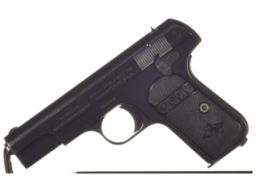 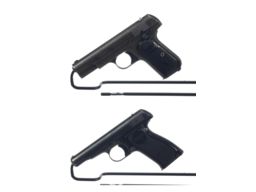 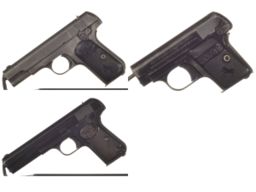